Last installment we covered the basic idea behind creating a star trail where a foreground element is moving. In this case the moving element is a radio telescope peering into the sky to discover planets and black holes.  A normal “lighten mode” stack produces the image at the left, below, while with just a little bit of work we can get the image on the right.

To recap, we use a single frame from the sequence and some careful masking to remove the blurred part of the image. For effect, we also don’t use the stack in 100% mode. See the prior article for details.

In this article we’ll show you step-by-step how we achieved the total look.

Of course we start with the stack. 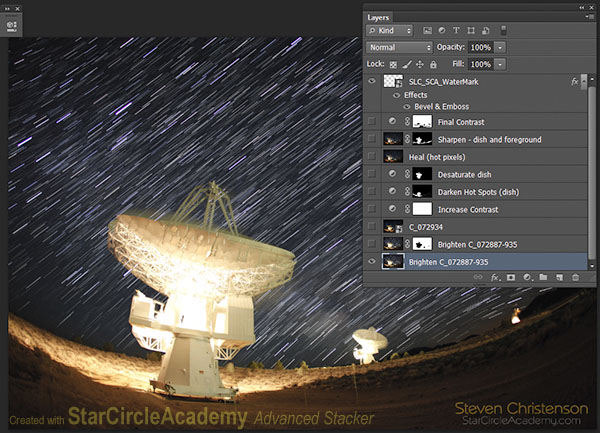 Then we layer in a copy of the stack and a single frame (the last or nearly last frame). 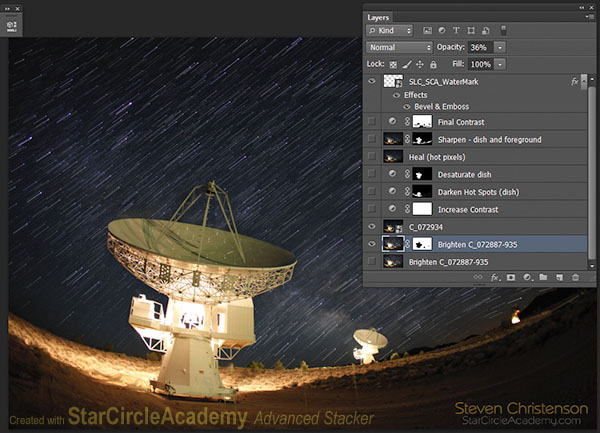 Here we have set the background (stack) to 36% Opacity, effectively darkening it. The single frame is 100% opacity and in Lighten blend mode. What we want to do is to remove the blurred part by replacing it with the unblurred single image. It’s easy to do. Select the STACK, create a “Reveal All” mask, and then go to town painting black on it (be sure to select the MASK, not the image). When done, the mask we create will look something like this: 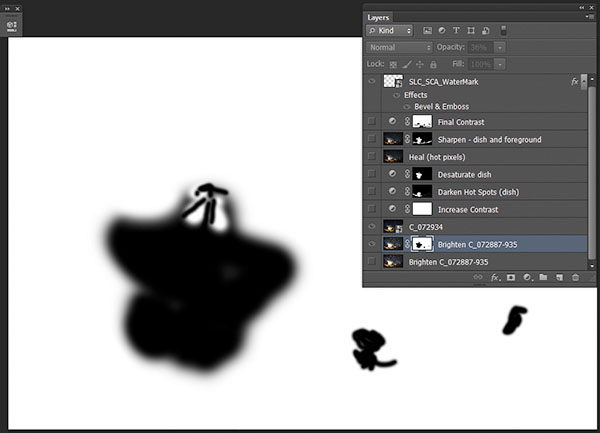 Notice how we used a slightly soft brush to “blend” the background and the still frame. We could stop right there, but I notice that the ground and the telescopes are a bit too bright, and I’d like to make the stars pop out. So the next course of action is to apply a curve, select the “Increase Contrast” option. Here I’ve adjusted the result just slightly. 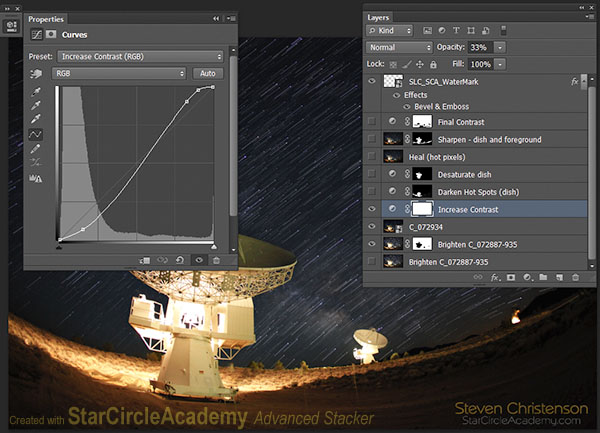 Next we want to tone down the bright stuff. We add another adjustment layer, and a “Hide All” mask and then paint white back on the mask to tone down what we want. You’ll notice that in the process, the colors intensify a bit. 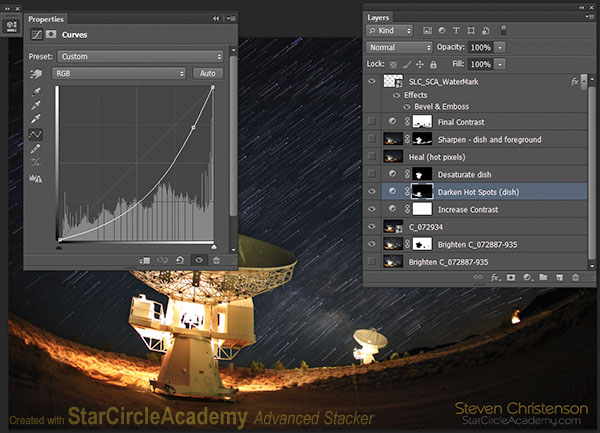 The next step we’ll want to take is to reduce the saturation – our radio telescope is moving from white to yellow. So the next step is to add a Hue and Saturation layer. As before we mask off everything, and then paint in only the radio telescope. We could cheat and use the same mask from the Brighten stack layer – and just invert it, but it’s not a complicated thing like a tree, so it’s pretty easy to change the mask to only operate on the radio dish and pedestal.  At the left, you can see how strongly we moved the saturation – and we upped the brightness a bit, too. 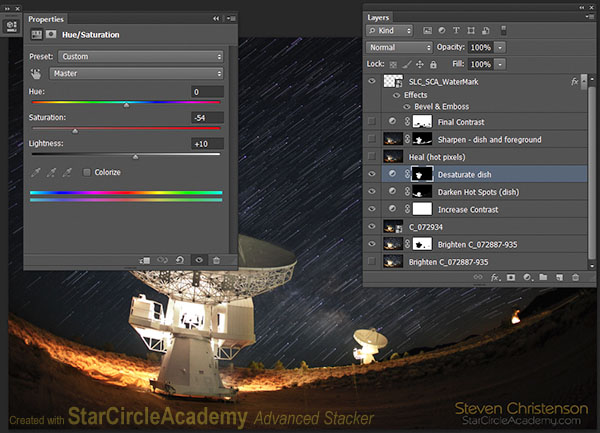 If we didn’t mask off the telescope and instead applied the saturation adjustments globally, we’d see this – not what we want. (Shift-Click on the mask turns it on or off – in this case we see that the mask is off by the red X through it) 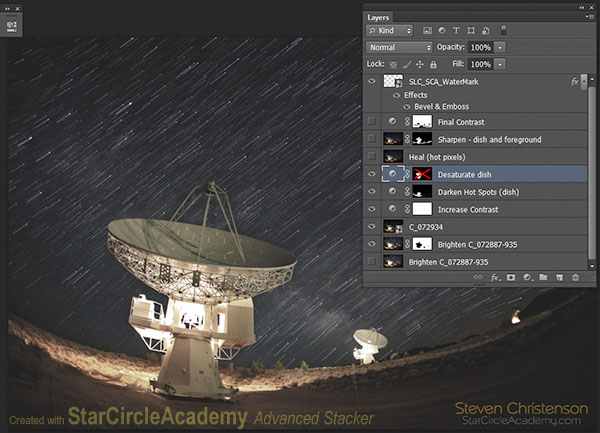 You won’t notice in the small size, but the large image has a number of Hot Pixels (red, and blue) that stand out. To solve this problem we use “Alt-Ctl-Shift-E” (Command-Option-Shift E for you Mac-o-philes) to make a copy of the layer. I named the layer “Heal” because I then used the spot healing tool to fix up those little problems.  I recommend making the healing tool diameter just slightly larger than the area to be healed. 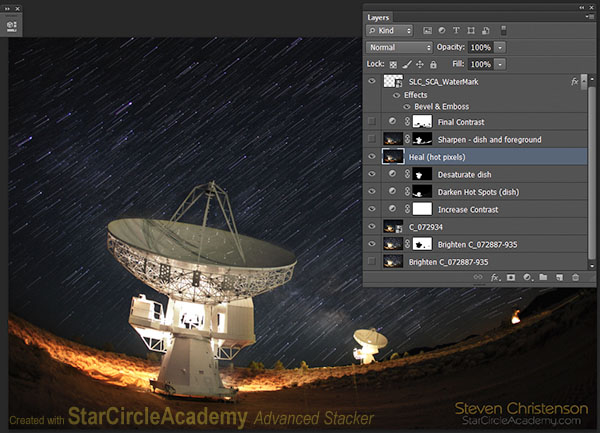 To make the Radio dish pop just a little more, a little sharpening is in order. In fact, sharpening the ground will work, too.  Duplicate the Healed layer (Ctl-J or Command-J). Name it Sharpen then use Filter -> Sharpen -> Smart Sharpen.  However I don’t like sharpening my stars, they look harsh. As before we’ll create a Hide-All mask for our Sharpened layer and use a white brush to reveal the areas we want to have sharpened. This is called selective sharpening.  In the small image here, the effect is not as obvious as in the larger image. 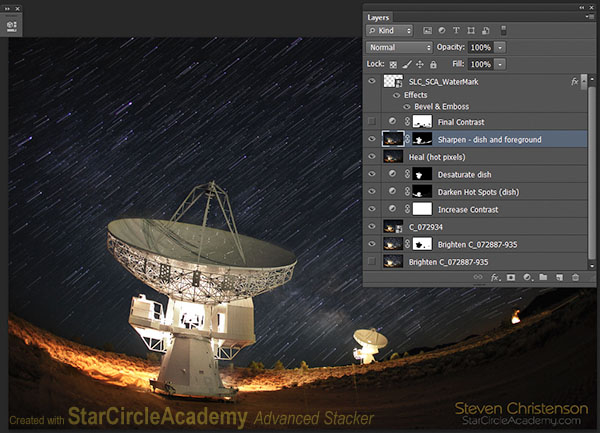 To get just a bit more pop, a little more contrast is in order. I created a curve and pulled up the midtones a fair amount while making minor negative adjustments to the highlights and the darks.  But, that adjustment brightened some areas a bit too much so I created a reveal-all layer mask and painted black on the areas that were then too bright. 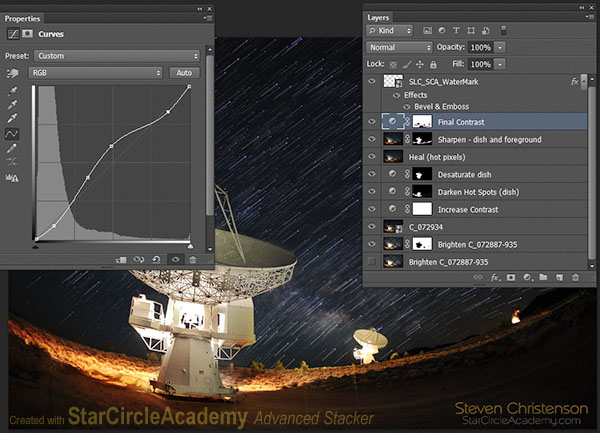