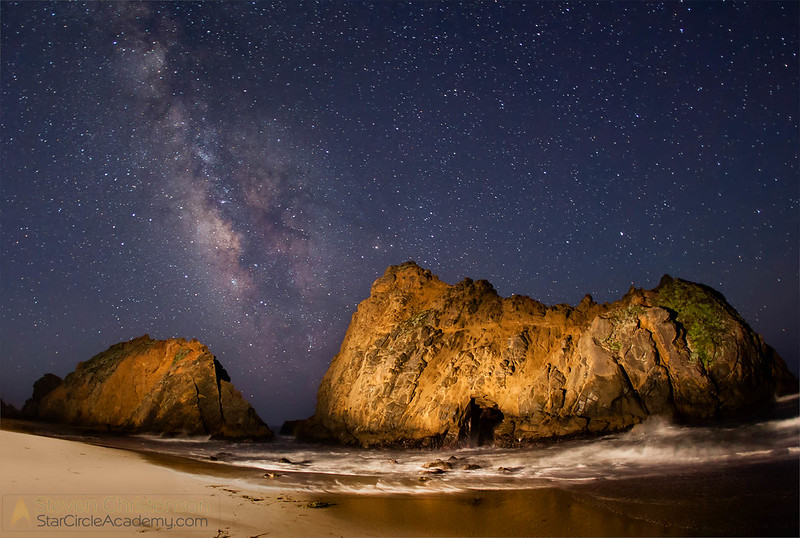 Obviously here at StarCircleAcademy we love our night shooting. And because many of you love it as well, we get asked a lot of questions about gear: which lens, which camera body, which tripod. To be frank we try not to answer questions about specific gear because there are many tradeoffs that you must consider when choosing. Those tradeoffs revolve around your budget, desire, goals, current equipment, and the mix of photography that you do.

If you’ve already invested $4,000 in Nikon, it really doesn’t make sense for us to recommend a Canon-only lens… and vice versa.  If you do a lot of wildlife photography and only occasionally dabble in night photography an ultrawide fish-eye lens may not make sense in your camera bag.  However, there are some important considerations for night photography that may not be obvious so in this article we are going to tell you what the most important characteristics of a Night Photography oriented lens are… things you may not have considered when choosing a lens for other purposes.

Things that Do NOT Matter

Let’s first set aside a few myths and talk about lens features that get hotly discussed in flame wars on photography boards.  Those include things like:

A lens for night photography can be any and all of the above. Ultimately the question is how good is the lens? Whether it’s a prime, zoom, macro, or not is irrelevant. No lens should be disqualified because it’s a zoom or a fish-eye.  There are theoretical reasons why a well made prime lens will outperform a well made zoom lens… but that doesn’t mean that any given prime will out (or under) perform any other lens. There are dozens of compromises to be made for any lens and some compromises severely hamper the usefulness of a lens at night.

Because there is so little light to focus, an autofocus lens is not particularly helpful. In fact some standard lenses that are designed to autofocus are notoriously difficult to get focused at night. Here are the considerations we believe are most important, roughly in priority order:

A lens that tempts you with an incredibly fast aperture of f/1.2 is all but useless if you have to stop it down to f/7 to make it acceptably sharp. Usable Aperture refers to the maximum aperture at which you can make exposures that you would be proud to hang as poster sized prints on your wall, and yes, that is very subjective. In night photography, as in astronomy, aperture wins.  The more light a lens can drink in, the more stars and dim details the lens can capture.  The f/ number is a ratio of the size of the front glass to the focal length of the lens. That means that the larger the front element, the more light it can drink – all other things being equal.  There is no substitute for “fast”.  Another advantage to a fast lens is that you’ll get more detail in your viewfinder.  You may be able to make out foreground objects in an f/1.4 lens that will be entirely inscrutable at f/4.

A zoom lens may have a variable f-stop ratio. This may be a detriment. If the ratio changes, e.g. from 2.8 to 4.5 then you’ll lose quite a lot of light when you use the zoom.

Sadly, lenses designed to autofocus quickly are often the worst choices for night photography. Take the Canon 50mm f/1.4 lens, for example. The amount of play in the focus ring is miniscule so manually adjusting focus for a night shot is a lot like trying to peel a grape while wearing mittens. A tiny 1/128th of a turn takes the shot from out of focus in one direction to out-of-focus in the other.  The lens, therefore, is only usable if there is enough light to get it to autofocus before taking the shot.  By contrast nearly all manual focus lenses are designed to allow plenty of room for focusing. A Rokinon 24mm f/1.4 allows me to turn the focus ring almost 360 degrees to adjust the focus.  That is a big plus when you want to get focus just right – it also means that slight errors in focus are less drastic. Avoid a lens that does not have a manual focus ring. Unfortunately more and more of the kit lenses are dropping the manual focus ring and lens markings.

A lens with nicely tunable manual focus is not so nice to use if you can’t start close to the correct focus location.  Many really cheap lenses have done away with the lens markings all together. We recommend you avoid those lenses.  An accurate marking may allow you to dial and shoot without having to check and recheck focus. That can be a time and patience saver.

No lens is perfect. If you found a perfect lens, you will have paid an enormous price for it. Every lens must make trade-offs. Some of the less desirable trade-offs for night photography include coma – bird wing or “comma-like” stars most notable in the corners of the frame and at wide open apertures. My expensive Canon 16-35mm f/2.8 L II lens has pretty awful coma in the corners.  That doesn’t mean I don’t use the lens, it means when I want the whole field of view I need to either stop down to reduce the coma, zoom in, or plan to crop:  all compromises that are unpleasant – but – my work with the 16-35mm lens sells just as well as with other lenses and it is a sturdy, well made lens.

Chromatic aberration – color fringing – is also a common distortion problem. Sometimes night shots reveal chromatic aberration more significantly than any other shots because of the sharp differences between say a bright moon and a dark sky.

Ghosting and flare are two other villains that produce strange artifacts on your shots.

Finally there is distortion due to the lens geometry. For example, fish-eye lenses render elements at the edges of the frame with odd curvature. Sometimes this is a really pleasing thing, sometimes not.  Fish-eye lenses also often suffer from “Mustache” distortion which causes a strange bowing of the bottom middle of the frame. Other standard distortions include pincushion and barrel distortion where the center of the image appears to be shrunken or enlarged. Many of these distortions can be corrected in post processing – but that doesn’t mean the image is going to be perfect.

The one distortion I despise the most is coma. Second most: chromatic aberration.

If you want to use the whole field of view, it’s not helpful if the corners are two or three stops darker than the center of the frame.  While the correct term for this phenomenon is light fall off, most people know it as vignetting. Picking on the Canon 16-35mm f/2.8 L II, it vignettes heavily at 16mm.  I find I have to zoom to 17 or 18 mm to reduce that effect. As with other distortions noted earlier, some post processing can remediate, but not eliminate the vignetting.

Other Obvious Tangibles Common to All Lenses

A well designed lens hood is very useful for keeping off-axis light out of your shot and protecting the front element from damage and dew. A lens hood is more important in night photography than in daylight!

Keep in mind that lenses generally hold their value very well. A lens you pay $1000 for today will probably be worth that much or nearly as much (or even more!) in 3 or 4 years. By contrast, your camera body will probably be worth less than half of what you paid for it because a newer, more featured, more powerful body will have replaced it. In the old days you could get better pictures by taking your good camera and putting better film in it. In the digital world the better film comes at the cost of a new camera.