It is premature to say we are back in the saddle after a long hiatus, but Steven Christenson did recently join forces with his mentor: Harold Davis for another “Dark of the Moon” Shoot in the Eastern Sierras. We have plans in motion to do more workshops like this beginning in 2018 (planning date is early September). 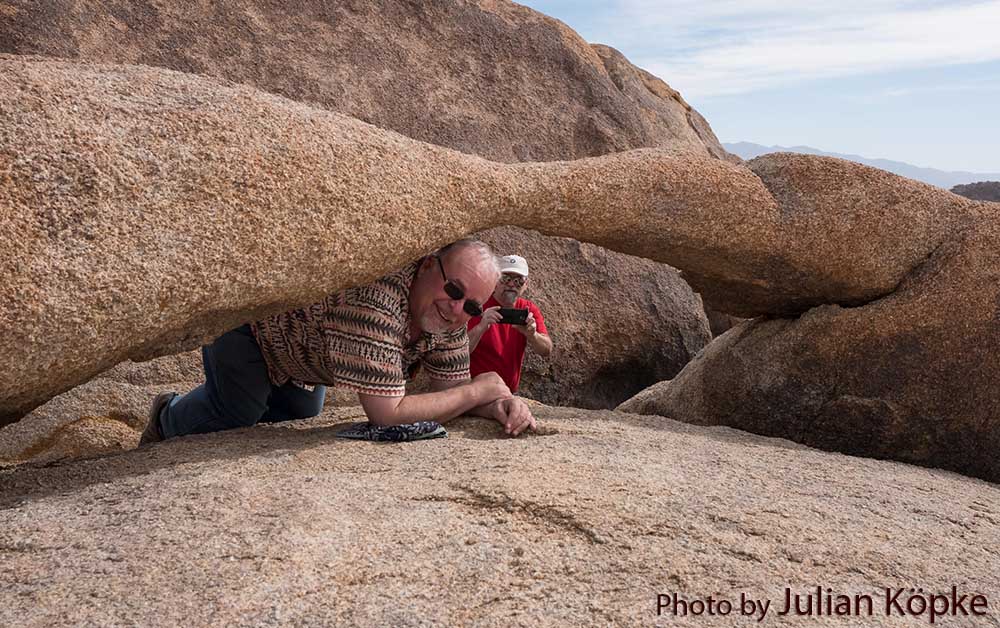 Harold and Steven at Lathe Arch. Photo by Julian Köpke.

As is our custom, we arrive early and re-scout our planned locations during daylight – as well as checking other potential locations. Not every location is suitable for our participants. Some locations are too dangerous, or too difficult to reach due to vehicle clearance or hiking distances or too small to accommodate participants. One pretty place that fails some of those tests is Steven’s favorite spot he calls Pointy Land. 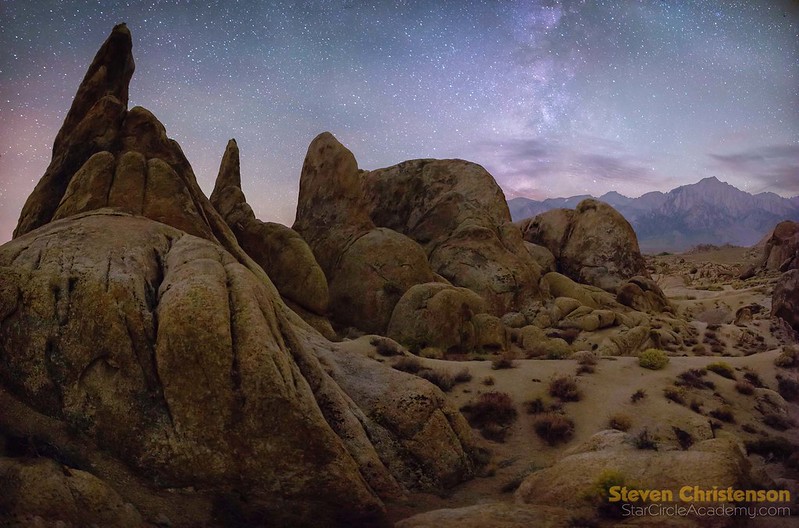 Give Us A Tip, Will You?

On the optional last night we went to a place that while large in area and easily accessible is not able to accommodate many photographers jockeying for the premium views. Such a place is the Lady Boot Arch below.

It seems appropriate to leave you with a processing tip (thanks for asking). The shot below was created from two exposures. The filename we gave it is LaserBoot_C-5550+75.psd The name serves to identity both the photo AND the two images (C-5550 and C-5575) that we used to create it. 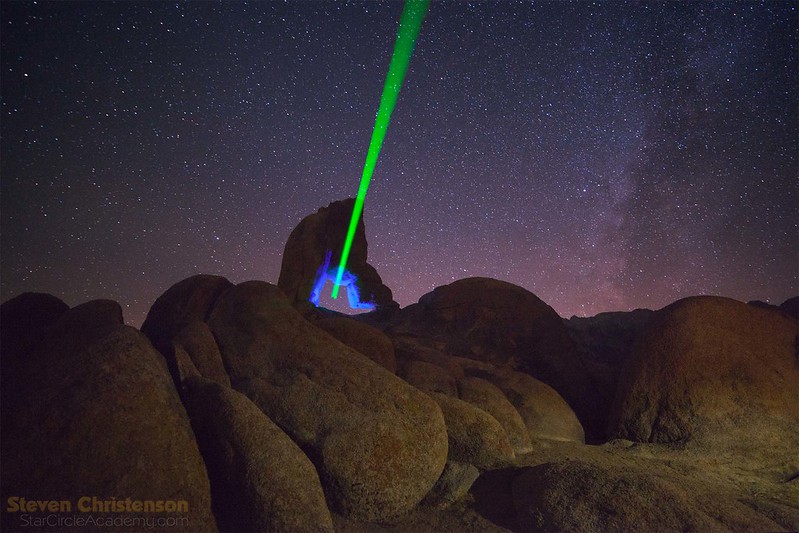 Here is what the processing looked like from the “Layer Palette” of the image above.

The tricky part in assembling the images was that the ball head had a problem. The head was not stable and it rotated left and right slightly between shots. We had to figure out how to align the images.  Here are some things that DID NOT work: 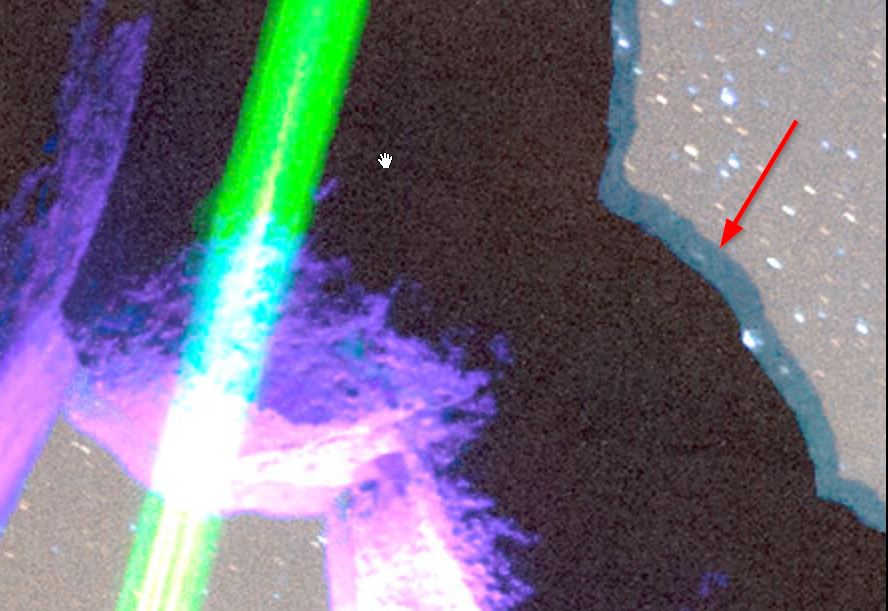 Photoshop could not figure out how to align the two nearly identical images. The laser and lit foreground confused it.

So how did I get them to align? Selection, slight rotation and “nudging”.  Since there was a lot of green bleed on the laser image (C-5575), I masked off that bleed – look at the layer mask on the bottom image in the “Photoshop Layers” image above.

To make it simple to merge the laser image with the light painted foreground, I:

We show one of the adjustments (Sky Color Correction). The actual curve(s) to use depend on the sky you start with. A careful observer will notice a lot of Curves Adjustment Layers. Curves can do almost everything all the other adjustments can do (lighten / darken / contrast / white balance and much more) so I recommend learning how to use Curves. Indeed we use curves so much that the Advanced Stacker Plus has a dedicated hot key: F9 to create a custom contrast enhancement adjustment layer.

Once the masking and adjustments were all just as I wanted, the almost last step is to do Ctl-Alt-Shift-E (Cmd+Alt+Shift+E for Mac people). That finger twister is a little noticed but VERY handy shortcut that does the same thing as “Flatten image” – but it does the flatten to a new layer and leaves everything else alone. If for some reason the finger-twister does nothing, be sure to select a visible document layer – not an adjustment layer. After the magic twister sequence, drag the newly created layer to the top.

I name the final layer: combined/heal. On that layer any distractions can be cleaned up using the spot healing brush. In Laser Boot photo there were a few hot pixels and some distracting marks on the rock that needed attention.  If there is some significant noise reduction to do the heal layer can be cloned again and Noise reduction applied.

We like this image created the second night of the workshop. This is a conventional star trail, but apparently Flickr-ites loved it. It became Steven’s most popular image ever. 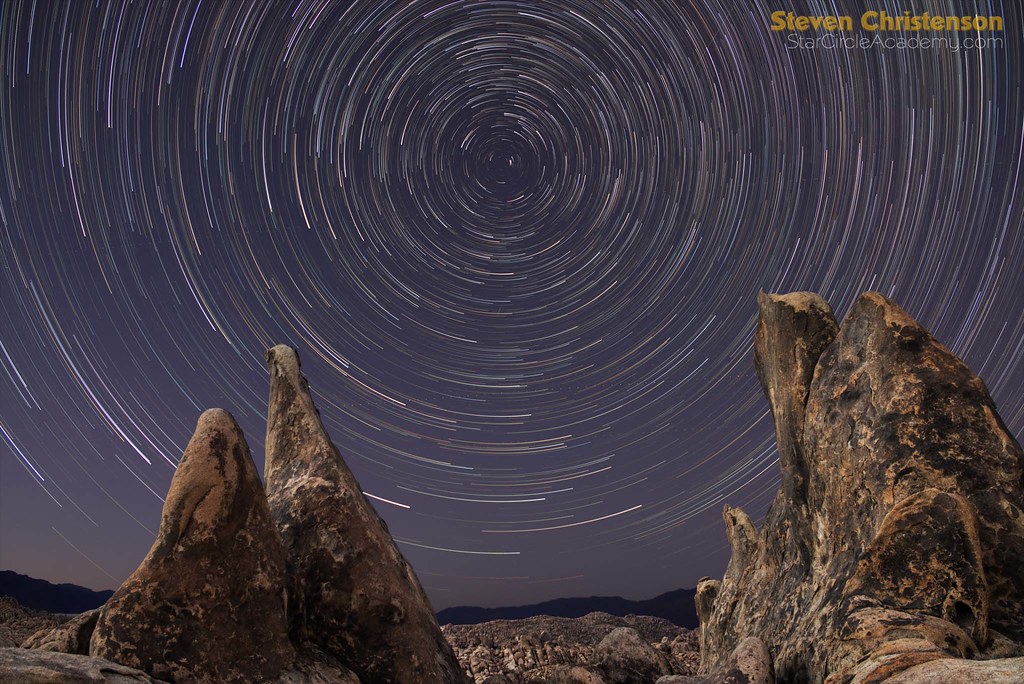 Not surprisingly, the image was created using the same foreground/background blending technique described earlier.  The background was stacked with Advanced Stacker PLUS. But there was not any movement, so it was easy to combine the two shots.  If you’d like to see another gorgeous view of this landscape from a different perspective, check out Harold Davis’ shot: Forgotten Kingdom (and read about it on his blog) 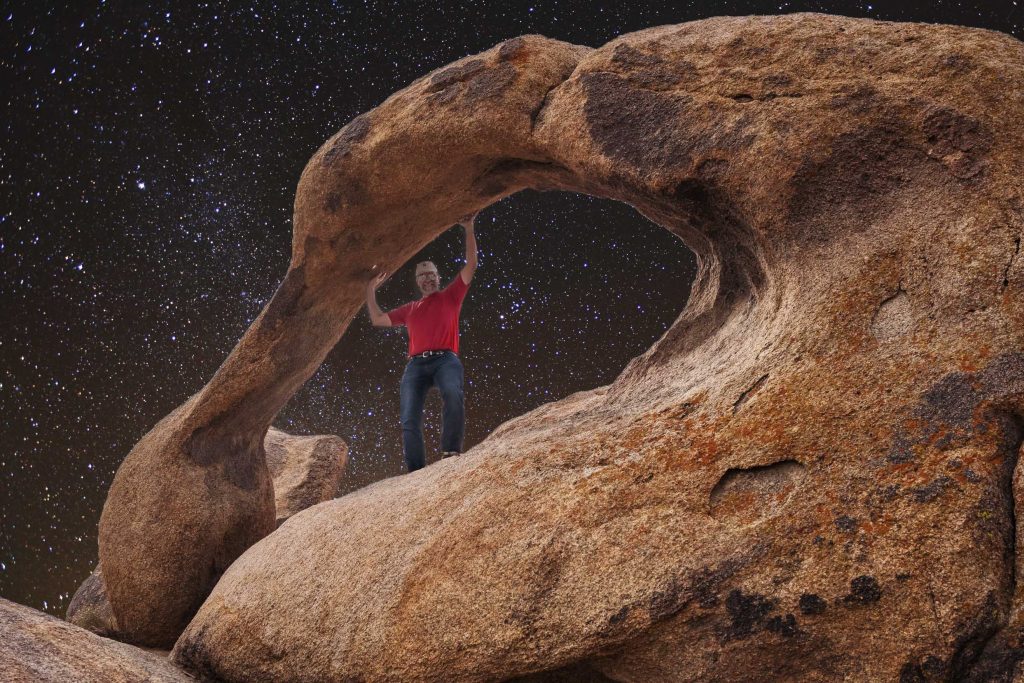 Wait, looks like we have two more images for you. The image above is a complete cheat: a combination of an iPhone daylight shot by Julian Köpke, and one of the pieces of the Milky Way we shot for the image below. We make no guarantee that the sky can be oriented like that in the arch. We included the above shot because it used the same foreground/background blending technique we just discussed – but with a bit more manual mask painting.

The image below is a Milky Way from horizon to horizon. North East is at the top, South West at the bottom.  We included this image here because … we like it.

One of the reasons we like this image is that the Milky Way is natural – not processed to death.  We could have cloned out the camera, but thought it provided a nice context.

1 thought on “Back In The Saddle”