Perhaps the highest praise Steven gets as a speaker is this:

Almost every photographer makes pictures to SHARE with others so praise of passion is high praise, indeed. Not everyone will have similar interests or feel the connection you feel with your work, but there are some questions you can ask yourself to strengthen the broader appeal of your work, that is, make your image more memorable. 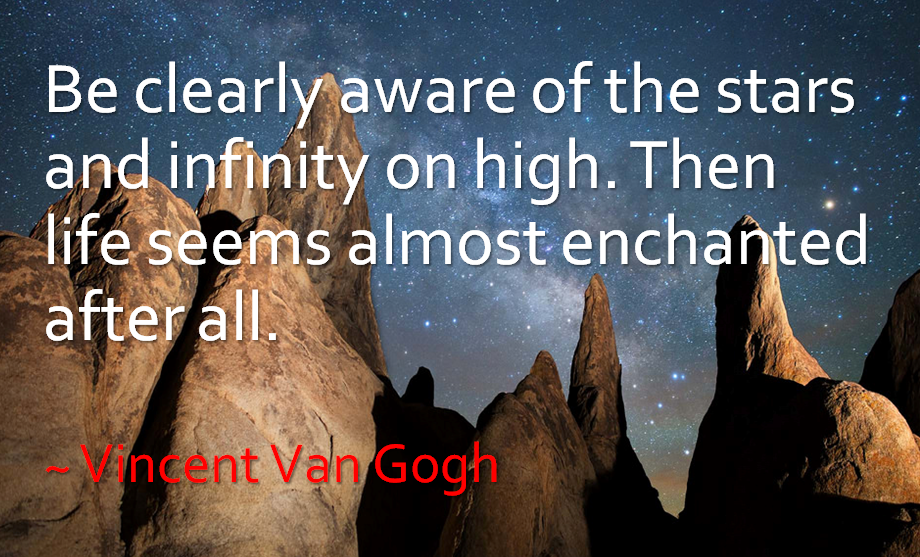 My friend and mentor, Kip Evans sold his photography from a gallery in Carmel, California. One of his laments to me was: I don’t really sell what I find beautiful and compelling, I mostly sell what others have a connection to – often touristy things like images of the Golden Gate Bridge. What drew us into Kip’s gallery was an image of a large breaking wave called Winter Swell. We have print of Winter Swell hanging in our bedroom (and so does at least one coastal hotel). 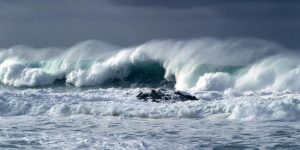 My wife loves waves – and I share her affinity. She will stand in awe and clap as huge surf crashes on to our coast. There is a visceral connection with the spectacle and power of the scene.

If we spend a little time thinking about what causes that kind of connection, we can endeavor to put elements of it in our work.

From my perspective, images need the following:

Of course these characteristics are inter-related and if only two of the four are strongly present that may be enough to wow the viewer.

Before you move on to the explanations, consider the following 4 images. Decide which image is the one that best reveals scale, the one that speaks to you (connects with you), the one that is most in line with your interests, and the one that reveals something you’ve not seen or understood before. The answer to each question may be a different image. Indeed, we would love it if you’d answer the four questions in the polls below… If you want to elaborate or leave a comment listing your choices (e.g. “A,B,B,D”) that’s fine, too. And yes, we realize we have mixed in a photo of a cute dog that has nothing to do with Night Photography.

The images are
A: Sky from Orion to the Pleiades, B: Trona Pinnacles with Orion and Canis Major, C: Mount Whitney in Moonlight; D: Pierre Grazin’ in the Grass. 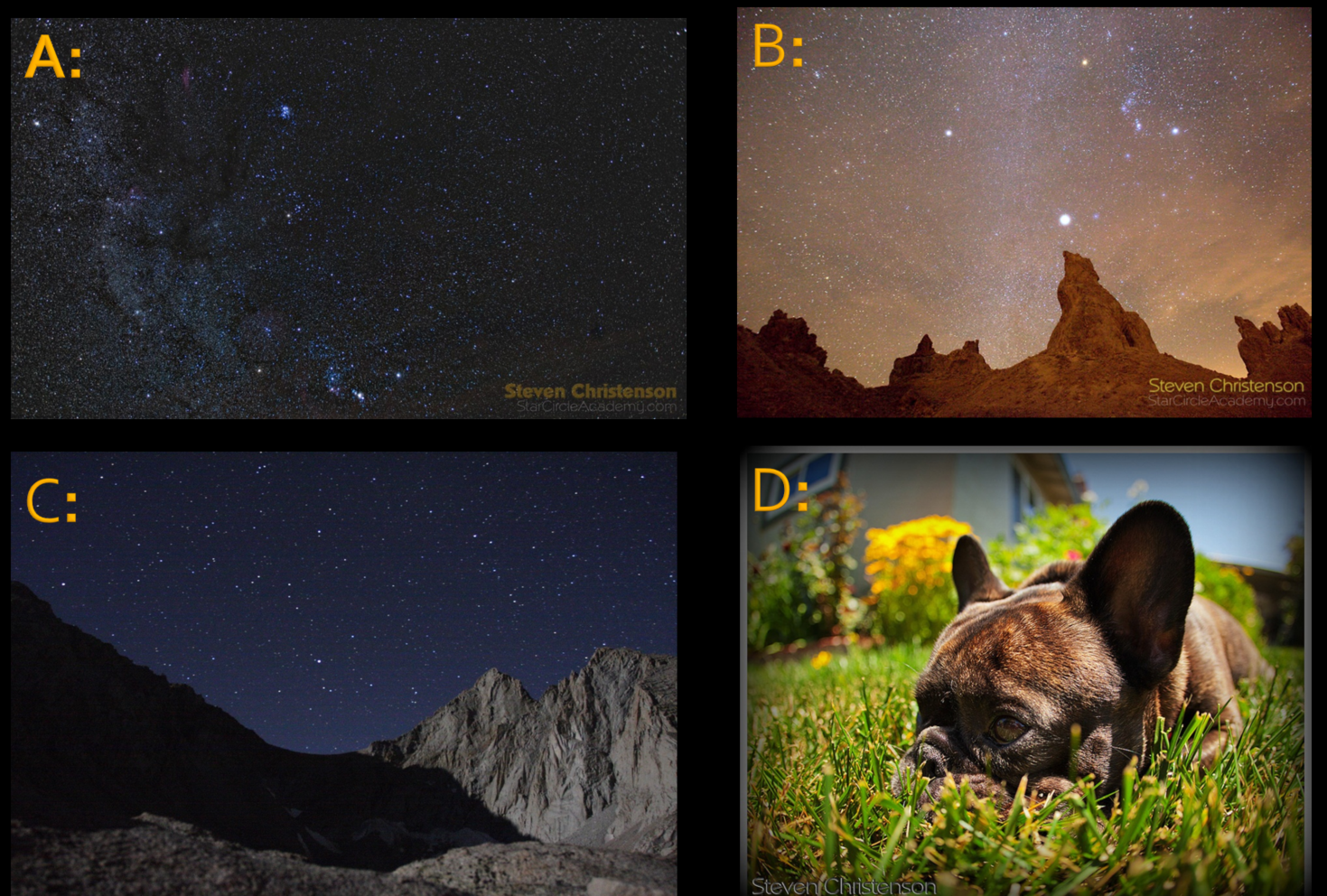 Fortunately for Night Photography, the last part – Revelation – is the easiest. Few people have seen a truly dark sky with starry heavens. If you can connect the viewer by linking Earth and Heaven you can draw people in.  Even fewer people realize that the Milky Way is awesome, and that stars have discernible colors. It is not hard to enchant viewers with a revelatory image.

Revelation can take many forms, however. For example: showing an unfamiliar but interesting place, illustrating a relationship that was not obvious before, revealing unexpected or unobserved colors or details. The camera is very good at seeing color, even in dim light – so it’s almost easy to be revelatory in a night image. In my opinion the single most significant mistake that people make in night images is in not selecting or not providing sufficient interest in the foreground – either because the foreground is boring, or because it is not well enough illuminated to speak on its own. My personal bias is to tune out a photo of a car under the stars, for example, unless the car is really, really sexy looking. My wife, who is a car fan, feels a little differently. I am also not a fan of junkyard scenes with garish colors, but my judgments (biases) are not about revelation, but about Interest.

Perhaps one of the revelatory aspects of image D is the “on-eye-level-ness” with a furry little creature. 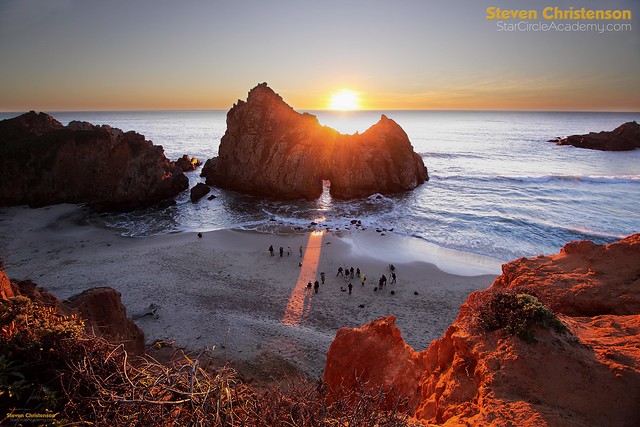 How many images of sunsets have you seen? Most of them are immediately emotive, colorful, and often compelling… but are they different enough to hold your interest?

People are all over the map in interests: favorite colors, past-times, subjects, hobbies … It is impossible to create an image that will be interesting to everyone. The point here is to think about your audience.  The photo that won Astronomy Photographer of the Year in 2010 (above) garnered interest because it was not a run-of-the-mill, same as everyone else night sky photo indeed it wasn’t a night sky photo at all! The image was something that I calculated would be of interest to judges in the UK. In the UK Stonehenge is an ancient, human-made edifice apparently built to measure seasons. My Photon Worshipper image is of a natural formation that does a similar thing – it only forms a beam of light during the winter solstice.  The image is also unlike the many existing images of the same phenomenon: it is a different view, and includes people to give it human scale.

Likewise my runner-up image in 2012 (below) was arguably the least well executed of my awarded work: focus is soft, color is off. But the scale and human interest of Lost In Yosemite is hard to miss. The contrast of tiny figures – once you recognize them as people – against towering trees and an immense sky was not lost on the judges.

I love this photo because it illustrates how humbling, even frightening, both the natural world and the cold depths of space can be for us as tiny, fragile human beings. ~ Olivia Johnson 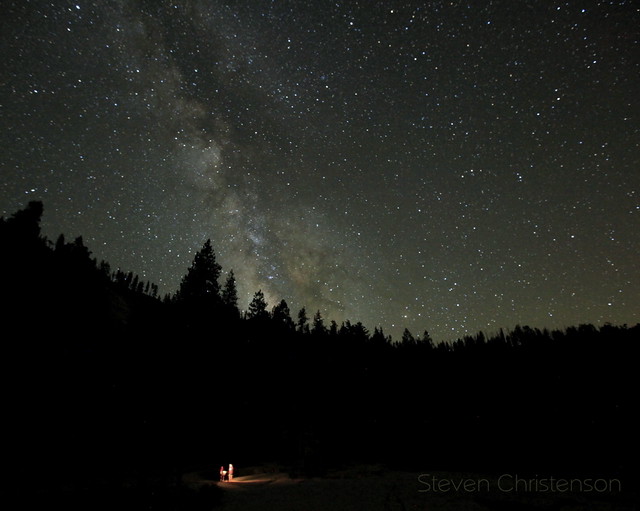 Lost in Yosemite: Two tiny hikers in flashlight against the enormity of the environment.

If you’ve seen it in person the scale of the Grand Canyon is inspiring. If you’ve seen it in photos, the Grand Canyon is LESS impressive. Why? My thought is that most photos lack human-scaled perspective of the kind in Lost in Yosemite above. Image A, above, is an image in which you likely found no sense of scale – unless you’re an astronomer. Image C shows rugged mountains (Mount Whitney, in fact). Hikers and mountaineers will implicitly understand the scale. Image B, however has formations that are of indeterminate size unless you have first-hand experience with them. Image D also gives scale clues… You see the size of the ears in proportion to the dog (named Pierre), and the size of the dog in proportion to the grass and flowers. But it’s not likely that it was the scale or size revelation of the dog that drew you in, is it?  If you found affinity with Pierre, it’s because you have – or had – a pet you are fond of, or wished that you had a pet. But we will address connectedness in a moment.

My suggestion is to be sure that something in your image imparts an easily recognizable scale.  In fact, putting a human in the shot can be powerful – Ben Canales won a National Geographic competition with an image featuring himself and Crater Lake – and a bit of whimsy.

Connectedness, or perhaps better term intimacy is not a single characteristic. By connectedness, I mean that involuntary emotive sense of drawing your attention – either as awwwww or that’s beautiful, or that’s disgusting, or my heart hurts. Sunsets, puppies, and kittens are perhaps the most photographed items of all. Why? Because most of them come laden with affection and fond memories – or sadness, or whimsy.  I immediately feel connectedness with well crafted night skies because I have many fond memories of sitting out in the dark under a horizon-to-horizon Milky Way.

I am reminded that compared to the enormity of the sky I feel small, but somehow embedded in that smallness is always a feeling of importance and one-ness with nature.

I assert that connectedness is usually a product of scale, revelation and interest, but connectedness can also occur spontaneously out of past experience and the human condition. My wife would put it this way:

Life is not measured by the breaths you take, but by the moments that take your breath away.

I gave thought to avoiding discussion of this important aspect of an image. Some of my most viewed, appreciated and commented images are NOT images that exhibit technical mastery! I purposely chose images B and C because they are older work, and lack technical robustness. Indeed, I have much better images from Trona Pinnacles (Image B), but none have been as popular as image B!

In summary, while technical mastery is a great goal to seek, if you work too hard on making your image sharp, color balanced, and so on, you may neglect choosing environments and images that have more compelling characteristics: Scale, Interest, Connectedness and Revelation.

So What is My Favorite Image – And Why?

If you’ve been paying attention you’ll understand that images, like aromas, colors and words carry different weights due to our personal experiences. I always gravitate to the image below. It’s my wife on our last evening in Santorini, Greece.  We had just finished a fantastic meal, I had given her that ring, and our view was awesome. And, it happens to be a sunset I shot with my cell phone.

You probably wanted to know what’s my favorite Night Image, though.  It’s hard to choose, but it’s probably one of these two. I’ve never uploaded the first one, though it’s predecessor was released. 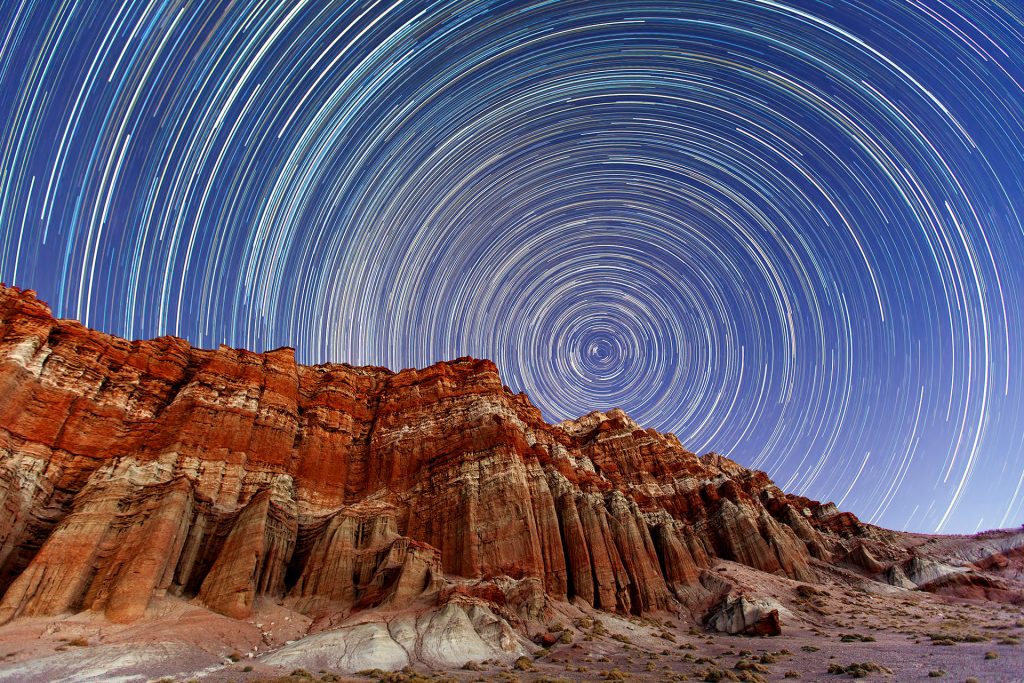 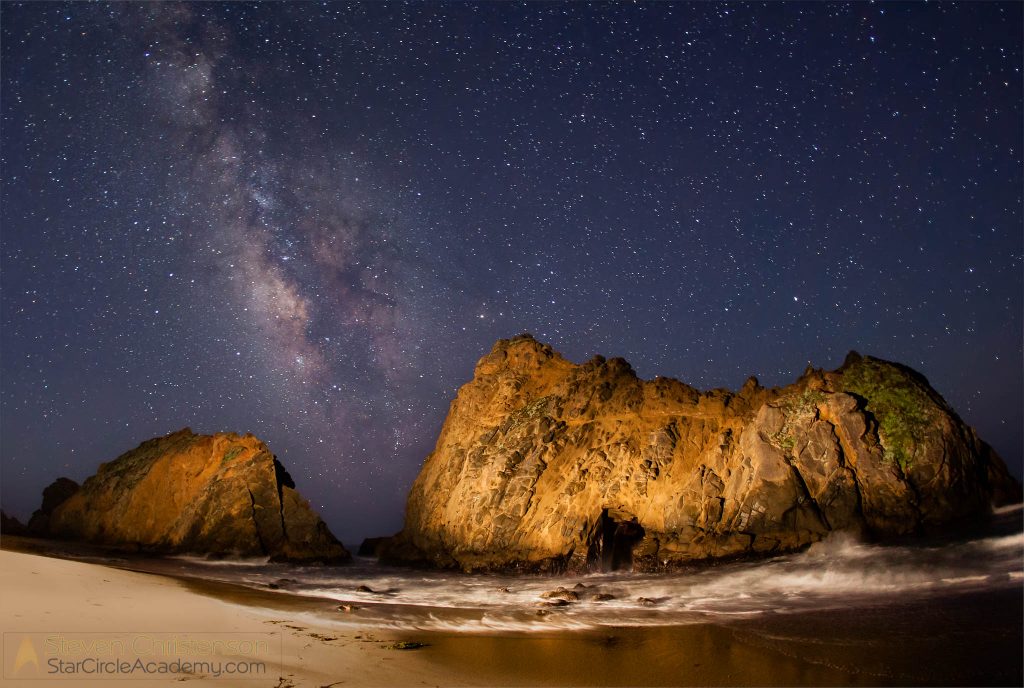 If you ask my wife the same question about my images, I am pretty sure she would pick this one: 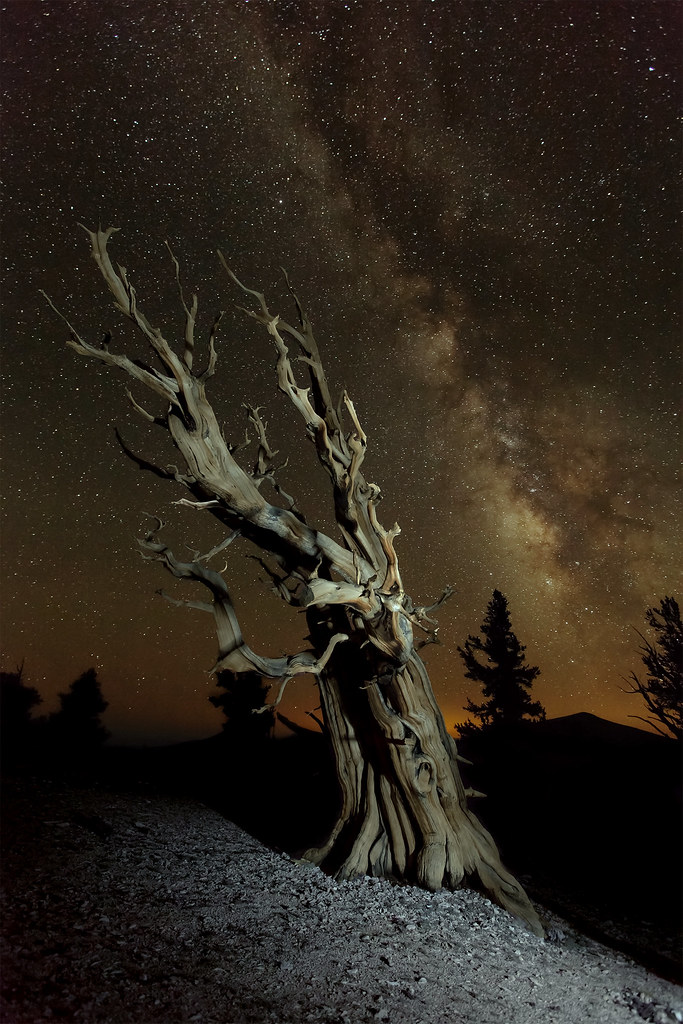 This is all part of a larger talk I am planning for a local Astronomy Club.  I appreciate your votes on the images above so I have a good set of data to go on. Also, please comment on an image that really inspired you – mine or anyone elses!

1 thought on “What Makes An Image Memorable?”