If you ask us what is the most potent tool a night photographer can wield, we’ll tell you: the histogram.  Unfortunately nearly all of the histogram information available seems to spend too much effort talking about what a histogram should look like and not enough time explaining what a histogram is… or that there are many different histograms and not all are equally useful. For example there are: luminosity histograms constructed from thumbnails created by the camera, there are color histograms created from the same thumbnails, and then there are luminosity and color histograms based on the actual sensor data – but those are rare. And of course there are still more histograms. In my early days I took what I thought was a fabulous photo of the fog creeping up against Mount Allison. It looked SO good on my LCD that I knew I was going to be in love with it. When I got home I realized that it was far from ideal. It was woefully underexposed and very noisy. That’s because I didn’t think to look at the histogram. At the time noise handling was not great and it wasn’t until recently that I was able to tease a half-decent image out of the data.

A histogram is a graph that shows the distribution of brightness (luminosity) over the range from the darkest possible to the brightest possible pixel. 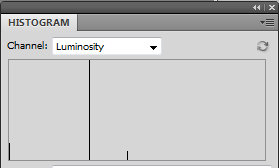 A histogram showing only three brightness levels – nothing brighter than mid range.

In the graph above, we see that there are some (we don’t know how many) of the darkest possible luminosity.  A lot of pixels that are relatively dark – corresponding to the tallest line, and a few pixels in the “midrange” of possible brightness values at the next stubby little line. The image from which the histogram was made is this one: 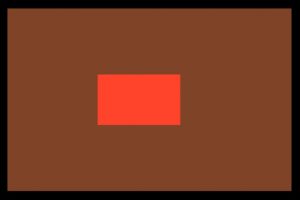 Looking at the image, it is pretty obvious that the little bump on the far left of the histogram is the black frame around the border. The tall line in the histogram is the brown, and the little bump near the middle is the orange color.  What may be puzzling is that the orange looks pretty bright and you would not expect it to fall only about half way across the range from darkest to lightest values. In fact there IS clipping in the red channel – but we don’t see that in our luminosity histogram above! We’ll see why in a moment.

At right is another histogram for the same data, 4 of them, actually. This was created using Photoshop’s “All Channels” view.

Rather than luminosity, the top histogram is in mode RGB showing each of the colors in this simple image against the maximum for that color.

The Red Histogram shows a complete range of reds from the darkest possible in the black border to the lightest possible. And here is where we first get a clue that quite a bit of the red is in the extreme right hand side of the histogram.  Most of the red is contained in the brown color.

Admittedly the image is not illustrative of a typical photograph of any kind. It does show clearly how the histogram corresponds to the values in the image. The image was created from additive layers using blend mode Linear Dodge ADD. Each layer has been constructed in different colors using the color value shown.  It is easy to calculate the majority of RGB triplets as: R=128, G=64, and B=32+16 (48).  The maximum values for an 8-bit image would be 255,255,255 – the value of the “whitest possible white” in this color space.

You might expect that the graph would reflect the 16-bitness of a 16 bit image. The maximum values for each color then would be 65,536, not 255 – but that’s not the way Adobe shows it.  A 65 thousand pixel-wide histogram would be beyond unwieldy.

Did you just have an “aha” moment?

One reason why the histogram is not completely trustworthy is that it is a composite of many luminosity values being lumped into one.  How so? Imagine possible values from 0 to 65,000 shown on a graph with only 255 different columns. A lot of “lumping things together” is present! It is possible to have lots of data in the darkest column and in the lightest column and still not have any blow outs or blacks.  Imagine it this way, suppose there were 100 possible luminosity values, but the graph showed just 20 columns.  The leftmost column would include values ranging from 0 to 4, the rightmost (brightest) would hold values from 95 to 99. So, in theory, you could have no zeroes and no maximums, but your graph would still show you data at each extreme.  This is where the histogram in Adobe Camera Raw is much more useful and accurate. Or to be more accurate, it’s not the ACR histogram that shows that much additional data, but it does indicate when items are being “clipped” – that is, reach the maximum or minimum.  But we’ll get to that in a minute.

In case you haven’t had another AHA moment, we want to explain why the histogram you see on your camera LCD should be regarded with suspicion.  That on-camera histogram is created from the thumbnail JPEG which is also shown on your LCD.  To go from raw data to a JPEG involves lots of operations including scaling 14 bits of information down to 8 bits, taking megapixels of resolution down to kilo-pixels and applying default curves and color assumptions. With that much data manipulation going on, your histogram reflects what your image MIGHT look like as a tiny JPEG and therefore may not accurately reflect what you’ve captured.

Get A Better Histogram: Use Lightroom or Adobe Camera Raw

Below is a much more useful histogram as found in Lightroom or Adobe Camera Raw. Your camera is not going to give you this level of detail- though you might have a highlight and/or shadows clipping indicator which we recommend you use.  ACR and Lightroom both offer shadow and highlight clipping indicators. Clipping indicators are enabled using the triangles in the upper left and right of the histogram or with the “J” key which toggles both indicators either on or off.  If you turn ON the clipping indicates by default blue dots replace clipped shadows and red dots reflect clipped (aka blown out) highlights.

Wide View: Shadow clipping (left arrow in histogram) turned on. BLUE indicates where the values have fallen to zero.

And here zoomed in:

Zoomed in: We see both clipping in the shadows and highlight clipping (circled -though there are many more).

Notice how in the 1/4 view, we see much more shadow clipping! If we zoom in to 100% it will be even more obvious. As we adjust the exposure, shadows, contrast, highlights, blacks and whites the histogram and the clipping indications are reflected in real time.

Lightroom is also giving you a hint which colors are being clipped.  The blue triangle at the upper right tells you that the blue channel is causing the highlight clipping.  When multiple colors are being clipped, the triangle will include all the colors added together. Here the white triangle for the shadow clipping tells us ALL colors are zero – that is clipped in the shadows.  For this image moving the exposure to the right reveals that the green channel is the most clipped.