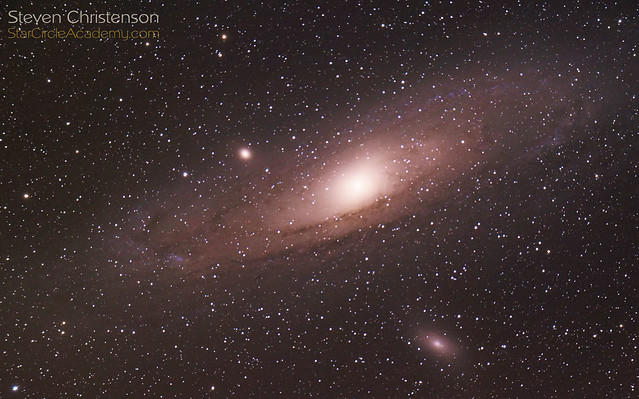 In the years since I began writing about astrophotography techniques and equipment (including review of the Polarie, pointing tips, and processing techniques) things have obviously changed for me.  For one, I’m not working at astrophotography as hardcore as I expected.  The reality of managing an informative website (this one!), creating publishing and supporting tools, conducting fairly frequent expeditions and workshops, writing and improving content for webinars *AND* having a day job means I have to temper my enthusiasm. Or to say it more plainly, have my enthusiasm tempered by reality.

However a student asked me this question and I felt it was a good topic. The question:

I read your review suggesting the Orion Astroview EQ mount with optional dual axis motors. I’ve been looking for a cheap way to do decent tracking and have considered making a homemade Barn-door mechanical tracker to something more reliable (motor driven).

Soooo, my question is this: Since you wrote that article, is that still the most bang for your buck, or have you found something better/bigger/cheaper?
— Bruce L.

As I noted in my article, there are definitely bigger and better and significantly more expensive things … though nothing cheaper that I’d recommend. The Polarie is in the same price league.  After I made my recommendation my Astroview suffered a series of blows to the declination drive that rendered the drive useless.  The first blow was that the locking nut fell off in the dark and was lost. Once I replaced the lost piece (at about $35) the next blow was quite literal and it bent the drive axis rendering the motor useless. The truth, however, is I really didn’t need the second axis at all and I’d have saved a few bucks by only buying the single drive motor to begin with.  The Astroview is just beefy enough to carry the weight of my Orion 80ED refractor and a camera.  And to be quite honest since it is lighter and not a “GoTo” mount it’s actually easier to set up and take down than it’s bigger cousin, the Sirius mount. But the Astroview is nowhere nearly as well made.  So yes, I’d still recommend an Astroview as a minimum viable solution… provided you stick with a camera and telephoto / normal lens to do imaging.  Most telescopes worth mounting on the Astroview will cross the boundary of what the Astroview is designed to carry and will be too heavy for good operation.

I had upgraded the focuser on my 80ED to one sold by ScopeStuff (#RNFR) – a $320 motorized focuser. That focuser proved easier to use and more versatile, but I later found it coming apart and it required some heavy tinkering and investigation to get it working again.  I also realized that the system was not that well thought out – it was designed to have the motor base mounted to the focus TENSIONING screw rather than attached to a fixed screw on the focuser.  That’s probably in part why when I got it, the tube would not travel all the way through the almost 4 inches of focus. I’ve restored it to operation but it still won’t travel in the final 3/4 of an inch… that’s fine, however as I have never needed that much in-focus – I’m usually working with the focus tube nearly fully extended.

Is A Barn Door Tracker A Good Solution?

Let me address the question about a Barn Door Tracker.  There are no places that I have found to buy barn door trackers, it’s strictly a home-built type of thing. As I explain in the Astrophotography 101 webinar, a barn door tracker is a form of an equatorial mount that has been simplified to drive only one axis (the right ascension) and with a limited tracking time.  Various designs like the double arm version improve tracking accuracy while complicating assembly. My personal bias is that even though I’m pretty handy with tools I’d rather spend $400 on a fully built system than $80 on parts and 10-20 hours of my own labor building and perfecting the system.  I suppose if someone handed me a robust kit for $100 and told me I could assemble a motor driven barn-door tracker in an hour or less, I’d give it a try.  But at much more cost in time or money the barn door tracker starts bumping into fully built solutions like the Orion Astroview and the Vixen Polarie or the iOptron SkyTracker.

One of the principle impediments with all things astrophography – and part of the reason I created the Astrophotography 101 course is that there is a LOT of language used that is foreign to most people. And, there are legion of difficult choices to make. For example, I recently bought a William Optics Telescope. It is a well built, heavier than expected, refracting telescope that features a power focuser. Perhaps as a surprise to the uninitiated the “power focuser” is not actually powered (motor driven), it is an improved version of the manual Dual speed Crayford focuser and the term “power” implies it’s ability to hold focus without slop or creep – even if the other end of the focus mechanism is a pretty substantial camera.

I had hoped my existing finder scope and guide scopes would easily attach to the new William Optics telescope, but they won’t. The fittings are all different. For the most part astronomy and astrophotography equipment is a wild west of non-compatible, non-interchangeable components.  Much like you see if you try to use a Nikon lens on a Canon camera.  Or an intervalometer built for a Sony on a Lumix camera.  The difference, at least to my way of thinking, is that the compatibility of components is much better spelled out in the camera world than the astronomy world.

What about the Polarie?

The Polarie will work well with normal lenses. When I mounted my 70-200 with a 1.4x and the Canon 5D Mark II (or 40D) on the Polarie, tracking accuracy was pretty bad – but not directly because of the Polarie. The problem is that the systems is not balanced and there are three different points around which the apparatus gets sloppy: at the connection between the ring-collar of the lens and the head mounted on the Polarie. At the point where the head is attached to the Polarie screw, and where the “collet” with it’s two thumb screws attaches to the Polarie.  Invariably one of those would become loose enough that it would slip.  I found that putting a counter weight at the end of the lens reduced slipping and improved the tracking – but it’s a hassle and highly dependent on where you aim.  A true equatorial mount is easier to balance. The Polarie system works better when there isn’t a lot of torque around those attachment points. 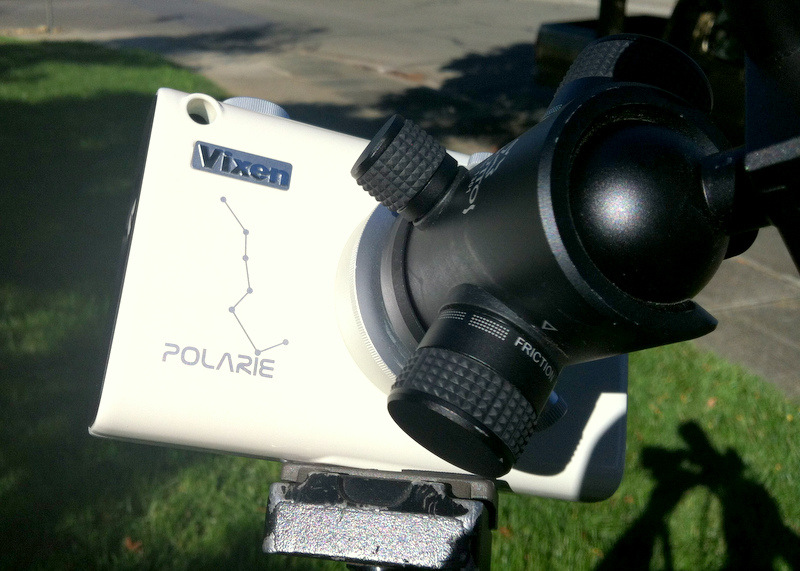 In summary, I like and use the Polarie because it’s compact, light, not bulky and easy to take with me literally anywhere I go. But I would not use it to take serious astro images.  The Polarie best fits Landscape astrophotography.  For example, below is a 63 second exposure using a Canon 40D at 1000 ISO, f/2.8 at 16mm.  Using the 500 rule, star streaking would become apparent at about 12 seconds.  In this small size there is nothing at all visible, but do notice how the foreground head frame at Bodie State Historical Park is blurred – that’s because the Polarie was tracking the sky at 1/2 sidereal (star) rate. The photo has been exposure enhanced (brightened) to see details, and noise reduced a bit. Here is an exposure that is a bit more germane. Two exposures, actually. One focused for the hand-lit tree, the other focused on the stars and both were combined in Photoshop.