It turns out the much hyped PanSTARRS C/2011L4 Comet is not living up to the hype. Unfortunately failure to meet the over exhuberant expectations  is common since predicting brightness and visibility of an object like a comet is a difficult science. In fact, it’s part science, part black art and part good guessing – mostly the latter.

The photo above was taken on March 12 when the moon and PanSTARRS nestled closely together. The close quarters made finding the comet much easier despite the bands of clouds passing by.  The strategy for finding the comet in that case was simple: use a telephoto lens, put the moon at the right edge of the photo and take different exposures periodically and at different settings (e.g. +2, 0, and -2 stops). Then hunt for smudges.

The IDEAL telephoto lens would be one that was a few angular degrees wider than the difference between the moon’s position and the comet’s position. How to determine the position of each is discussed in the last section below. Figuring out the angular view of your lens is easy using online tools like this one from Tawbaware, makers of Image Stacker (like that program!). If you know the field of view at your minimum and maximum zoom, you can use that information to your advantage.

Finding the Comet with a Nearby Moon

The point at the moon strategy made finding the comet easy because:

I know some people tried to find the comet using wide angle lenses. That strategy might work, but the comet is such a tiny thing and it’s visibility is so tenuous based on the atmosphere, light pollution, and sky brightness that you may only realize – as many did – that you captured the comet after carefully inspecting your photos at home. The truth is you are unlikely to see PanSTARRS by eye or in your camera’s view finder unless your conditions are nearly ideal.  Hopefully ISON which is coming in December will be brighter and better.

Finding the Comet when the Moon is Farther Away

The following night, both the comet and the moon had moved relative to the sky. On March 13, the moon was 12.5 degrees above the comet and about 4 degrees farther west (again, how I knew this is coming in just a minute).  So one simple strategy for finding the comet would be to zoom your telephoto lens so that it has a field of view of about 14 to 15 degrees in the long direction which for me, is 80 millimeters focal length on a 1.6 crop factor camera.

On a tripod with the camera in portrait orientation adjust the view so that the the moon is in the upper left of the frame. Shoot bracketed shots. Check the lower right corner of each one for the tell-tale comet smudge.  Keep readjusting the view so the moon remains in the upper left for each shot. Zoom out a little bit too, in case your geometry is a little off. Eventually as it gets dark enough or the sky clear enough you should find it.

In fact the way I found the comet last night without using my camera but by using my telescope. The program Clinometer (on my iPhone) measures angles. I sighted the moon with my 8″ Dobsonian telescope and measured the angle along the telescope barrel using the inclinometer program. I then lowered the altitude (elevation angle) of the telescope by 12 degrees to match the altitude of the comet. Then I slowly rotated the telescope northward until I found the comet.  It wasn’t easy from my urban location, but it wasn’t impossible either.  By the time I was able to find the comet it was only about 6 degrees high in the sky – that’s way too low if you have trees, hills, and houses nearby to deal with.  In theory, this strategy would work with a telephoto lens or with binoculars, however, binoculars need to be steady and where I spied from last night had streetlights in the distance and the flare and glare from those streetlights made finding the faint comet nigh impossible.

What if there is no Moon to Find the Comet With?

Unfortunately starting on March 14th, the moon will be quite far from the comet, so the opposite strategy is required:  Use a landmark in a known direction as the starting point and look “upward” from the horizon.  In other words, zoom your telephoto lens so that the field of view covers the angle from the horizon to the comets altitude (angle) above the horizon.  Don’t forget that as the earth spins this angle changes every minute! Orient you camera in landscape mode and point it as close as you can to the correct direction (azimuth). Look along the top of the frame to see if you’ve captured the comet. 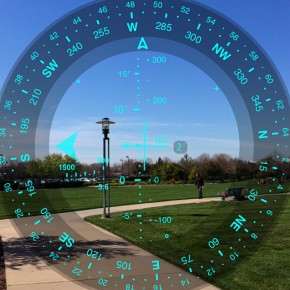 But what direction should you point your lens or telescope? Use a compass application or actual compass. BEWARE however as the compass applications have lots of gotchas and are only accurate to about 5-10 degrees.  And if you aren’t sure how to use a real compass your local magnetic declination might bite you. Better would be a GPS with a built-in calibrate-able compass.  And perhaps even better still would be to use an application like TPE (which I discuss in my Catching the Moon Webinars) to calculate the correct azimuth from the location you plan to stand.  An application that might help a lot is “SpyGlass”
however don’t forget that I found the directional accuracy of my iPhone and iPad to be pretty poor.  Being off by 5 degrees may mean looking in the wrong place.

How Do I Know the Altitude and Azimuth for the Comet? 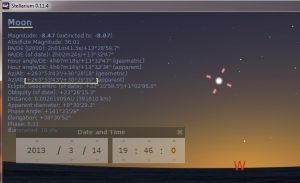 Unfortunately, that’s a tough one.  I use the free program Stellarium. I then added the comet to the “Solar System Data Base” (search around on the web and you’ll find instructions). I selected my viewing location, dialed in the time, did a search for good ‘ol C/2011 L4 and let it tell me the azimuth and altitude. 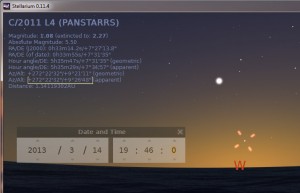 Above I’ve dialed up the time and clicked the moon. The highlighted line shows me the azimuth (direction) and altitude (angle above the horizon) for the moon which at that time are 264 degrees or just a little south of west, and 30.5 degrees high.  Clicking on the comet shows 272 degrees – a tiny bit north of west and 9.5 degrees.  So now we know that the comet will be 8 degrees north and 21 degrees south of the moon – and that won’t change significantly for the rest of the night.

Since we also know the direction for the comet is about due west at this time, we can apply the telephoto-lens horizon trick I described earlier.

Another way you can find the azimuth and altitude is by checking my animation HERE – note that the animation is correct for San Francisco  (and most places nearby).  There is also a table of the azimuth and elevation in the text of the Flickr post.

By the way, one way to find the right spot on the horizon is to use the sunset location as a guide. 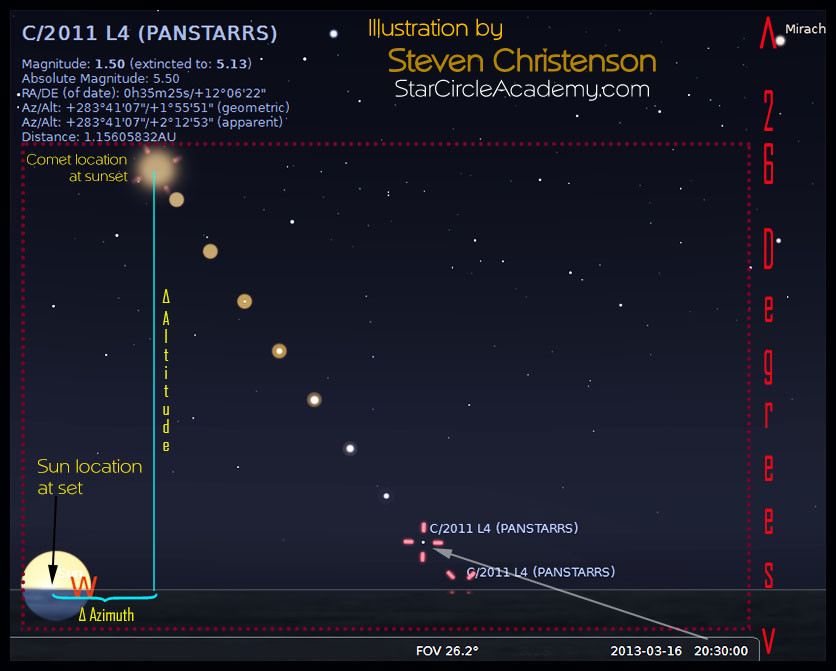