I had set up a program to automatically compute the ISS transits for different places and upload the results once a day – at around 11:00 am each day. See Zoom-Zoom for the impetus for this as well as references. However, it grew difficult and cumbersome to keep it working since the behavior was to run a Java process on my home computer, compute the coordinates and up load to my website.

But, the good news is… I found two resources that you can use that are quite helpful.
One is an Android App called ISS Transit Prediction Pro by Ed Morana. There may be an IOS version as well. I find it a bit clunky, but it does help to have a portable source to do predictions.  For example, here is the result of running predictions for the San Jose, California Area. There is a Jupiter transit and a lunar transit depicted. You can adjust how far you’re willing to drive, as well as the altitude of the transit.  What you can’t do, at least I haven’t figured out how, is to fine tune the prediction for a specific location. I imagine you can literally go there, or use Google maps (or set the location using the location in the app), but those options are a bit tedious.  See the web based app below for a comparison. The ISS Transit Pro app does allow you to save and share predictions – a feature that doesn’t exist in the Transit-Finder web page below.  ISS Transit Prediction Pro ALSO calculates transits of planets like Jupiter (see below). I’m eager to try getting one of those!

Another app is the Transit Finder (https://transit-finder.com). This web app is pretty slick. It combines Google maps click-ability with clear information, and it is pretty easy to fine tune something you’re interested in. It does have a problem in that as of this writing you will get warnings about trouble loading Google maps, probably because the authors would need to pay Google a fee to use the data Google offers. When you start this web page you can have it auto-detect your location, or select it on a google map. You then set your other options and eventually click CALCULATE to see predictions.

You’ll notice above that there are two predictions shown out of three, one crossing the sun (just grazing it) and another that is a “close pass”. The good news is, it’s very easy to turn that grazing hit into a centerline hit… and that close pass into a hit as well by moving to the correct location. Indeed, the grazing solar crossing shown is what I could have observed from my home! After fine tuning a bit, I discovered a public place with an open area from which to set up instead.

You fine tune the prediction by using “Show On Map”, then finding/zooming and clicking on the centerline in an area that may prove useful for observing. For example, here I’ve zoomed in and scrolled to the street just outside the Apple Campus in Cupertino, California. The first image shows the boundaries of visibility superimposed on the map. Red indicates solar transits, blue indicates lunar transits.

In the second image below the entire background is red because the area shown lies between the boundaries where the ISS grazes the sun. The center line is where the transit goes right through the middle of the object (sun/moon).

Because of the (current) limitations in the Transit Finder map, it’s helpful to pull up a second window with Google maps zoomed into the same area. I find a satellite view is helpful. Note a couple of other things… the window shows the exact time, the direction to face (Azimuth: 100.1 degrees which is 10 degrees south of East), and how high in the sky to look (Altitude: 38.5 degrees). HIGHER is better because it means the ISS will be closer to you and thus appear larger.

After inspecting the map all along the center line, I chose the PruneYard shopping center parking lot as the go-to place because it’s a large flat lot. I originally planned to be closer to the street, but discovered that tall trees made that impractical.

Some Final Thoughts and Caveats

Remember that the International Space Station (ISS) is an in-use craft. As such it is subject to orbital changes – both of the routine kind and for special operations like adjusting for docking, or moving to a higher orbit. Because the orbit is changed fairly often, predictions longer than a few days in advance may be in accurate. It is a good idea to recalculate a few days before, and even a few hours before a planned event. In the case of the May 2nd event, for example, the centerline of transit went through the middle of a local park 24 hours before the actual event, but recalculation on the morning of the event showed a change large enough to affect the quality of the image (it still would have been a grazing hit, but not a center hit).

It is MUCH easier to catch the ISS traveling across the face of the moon (when it is lit by sunlight) because you can easily follow it with your eyes. Catching the ISS crossing the sun is MUCH, MUCH more difficult. You literally need time that is accurate to 1/10 of a second or less. Fortunately there are apps for that, too. I use Atomic Clock on my Android. I use a shutter release cable, set the camera to high speed capture and try to hit and hold down the shutter button 1/2 second before the scheduled time. Much sooner and I risk filling up my frame buffer before the event starts. I plan to try this all again but instead of shooting still images, I’m going to capture 8K video (and use a higher magnification)

Interestingly, rough aligning your telephoto/telescope in the daylight with the sun is pretty easy to do by paying attention to the shadow that is cast on the ground.

Do not be afraid to play with adjusting off the center line. If you are shooting against a half full moon, for example, you may prefer the ISS to cross over the shadowed portion of the moon (or the lit side). You do get the most TIME to capture if you hit the center, however… but we are talking a difference of about 1/4 of a second or so! 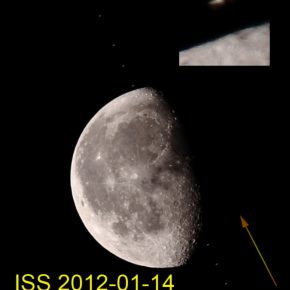 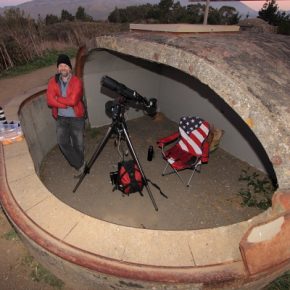 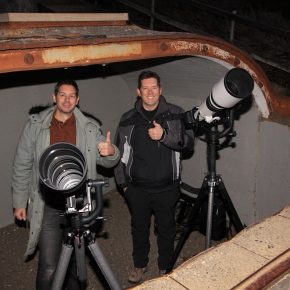 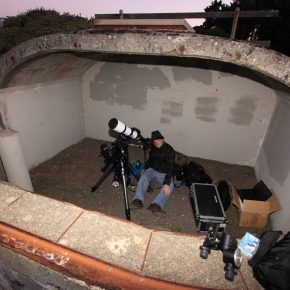 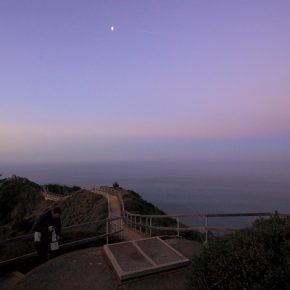