I created a problem for myself twice and with the Total Lunar Eclipse coming in April, 2014 I suspect I’ll be creating the same problem again.  I wanted to record a time-lapse of the May 20, 2012 Annular Solar Eclipse as well as the June 5, 2012 Transit of Venus.  I used a solar filter and an Equatorial Mount to help me track the sun. Unfortunately getting a good polar alignment during daylight is beyond my skill set. Without good alignment I had to manually repoint the telescope rather frequently. It is not necessary to understand any of the gobbledygook you just read except to know that the sun was MOVING from frame to frame – see the image below.  With all that movement, a time-lapse looks like a jitterbug dance.  In fact, this artsy composite shows just how much the sun moved around in my frame – that is, all over! 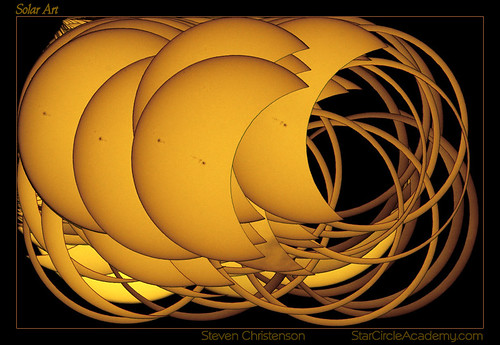 Annular Solar Eclipse with un-centered and trimmed frames. AKA Solar Art the “dots” on the sun are large sunspots.

My friends suffered from similar problems and each of them undertook automated solutions to the problem using Photoshop or something similar.  My goal was to solve the problem in a generic way and along the way I learned some useful additional Photoshop tricks.

I used the trim feature of Photoshop.  You can find Trim under Image -> Trim.

Trim makes note of the current value of the upper left (or lower right) pixel. It then creates a selection that includes all of the rows and columns that have the same value and inverts the selection. Finally it crops off all of the selected area into the smallest possible rectangle.

An easy way to think of this is: imagine a dark photo with a white frame around it.  By using “trim” the entire white frame will be cut away.  The same approach works if the frame border is black, blue, transparent, and so on.

But there is a catch!  There is no tolerance setting for the trim value so whatever needs to be trimmed must be an exact color match. Unfortunately this presents a problem because even in a photo of a black sky, the black areas are not uniformly black.  Some values may be 0,0,0 but others 1,2,1.  And then there is noise!  Even though you may not notice a difference between two adjacent pixels trim only operates on those pixels that have EXACTLY the same value as the upper left or lower right.

To get trim to work in a reasonable fashion, therefore, we must turn all of the almost black pixels into black (or some other color).  I feel a Photoshop trick coming on here. Our trick is to use a duplicate layer and adjust it to cause it to trim the way we want. We will discard the duplicated layer when we are done.

Here are the steps in illustrations. 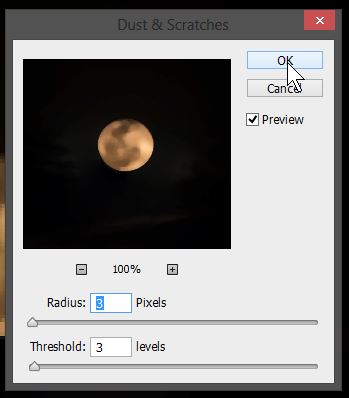 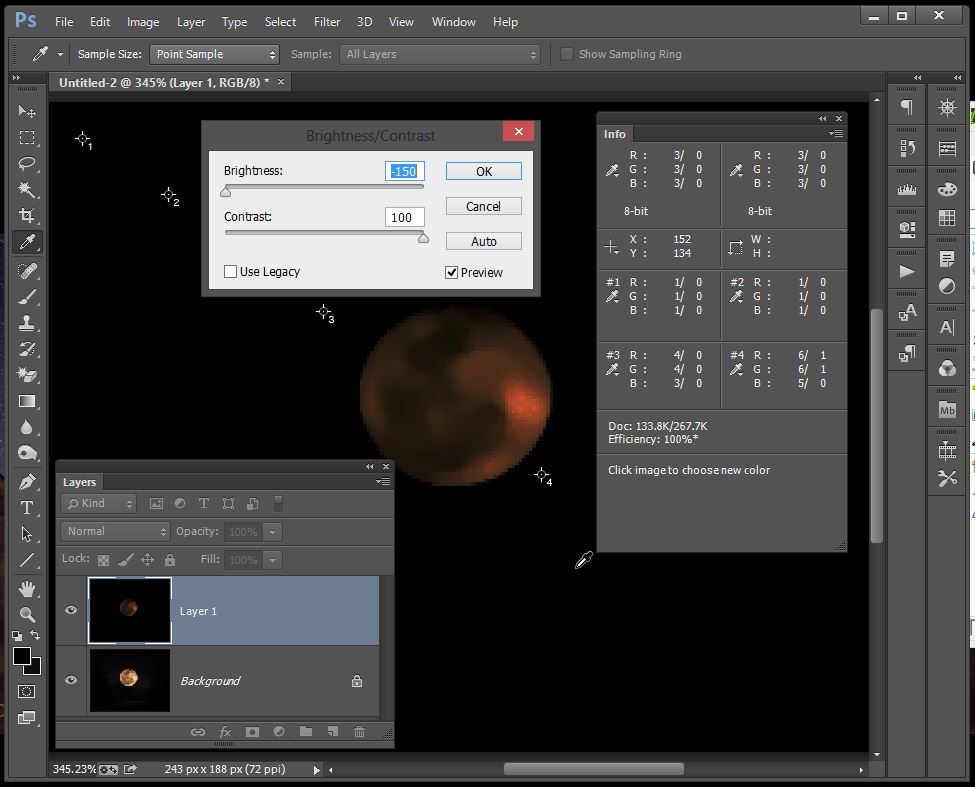 Dust and Scratches + Fill may not be enough. Fortunately the duplicate layer can be severely adjusted if needed since it will be discarded. 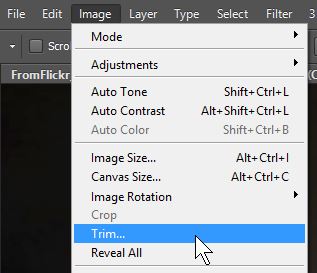 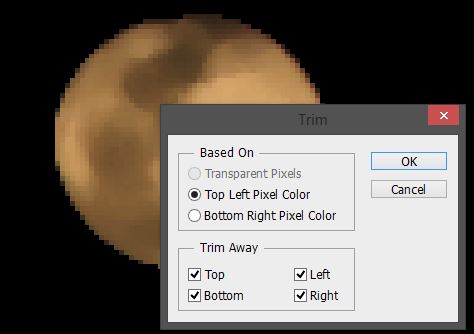 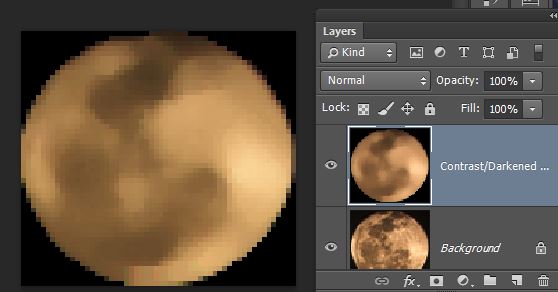 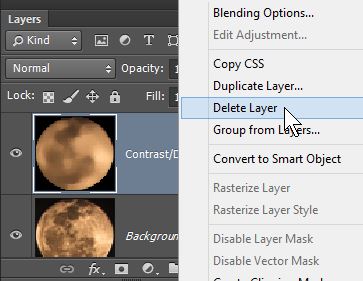 What If It Crops Too Tightly or Inconsistently?

This set of steps written as an action can be used to automate the process of trimming. There are still a few remaining problems to work out. Sometimes after trimming the total horizontal or vertical pixels of the object the resulting image size will differ by one or two pixels. To solve the “dimension” problem, the simplest method is to use Image -> Canvas Size. Set the canvas to about 20 pixels larger in each direction. Select “center” (the dot in the middle next to anchor) and set the fill color to match the background. 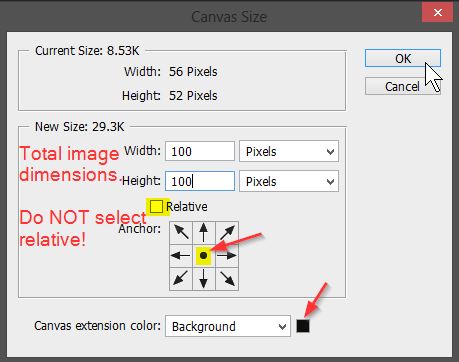 Expand the canvas and center the trimmed image 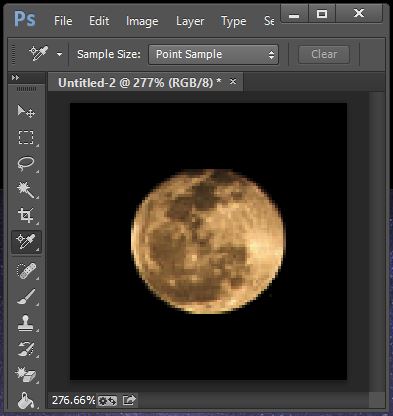 After Trim and Canvas Size

The above procedure will work quite well for animating a sequence of sun or moon shots – except for eclipses.  Eclipses don’t work properly because an edge of the sun or moon disappears leaving no edge to properly orient with the others.

What can we do when we no longer have constant edges to align with?  Divide and conquer! Instead of trying to apply the same action to all of the images, we will can change edge we select when enlarging the canvas size. We can orient sets of images based on which part of the image remains constant.   Which edge or corner should you pick? Pick the edge that stays the same (if there is one!)  For an Annular solar eclipse, at least one of the directions will never be darkened – that’s the one to pick!  The annular eclipse sequence shows that the upper left limb and lower right limbs of the sun remain present in all of the shots.

There may still be another problem: Field Rotation. If you’re thinking that perhaps this has something to do with improving crop yields on a farm, sorry to disappoint you. The Annular Solar Eclipse and the Transit of Venus were events that took place over a period of from 3 to 5 hours.  During that period the earths rotation causes the sun, moon and stars to move. It also causes them to “turn” as viewed from terra firma.  You can see this for yourself if you watch the full moon from moonrise to moonset. At moonrise make note of the orientation of the “man on the moon” and compare it with the orientation at moonset. Go ahead and watch. I’ll wait for you.

So what do you do if you have this field rotation?  Either live with it and accept that the animation won’t be entirely accurate, or you’ll have to do a much more complicated set of operations by progressively rotating the images.  That’s more than we want to tackle, so you’re on your own for that!

The Annular solar eclipse sequence. The Abstract Solar Art image at the top of this article was created from the un-centered and trimmed frames. Obviously this wasn’t perfect – in part due to clouds and shimmer in the atmosphere. 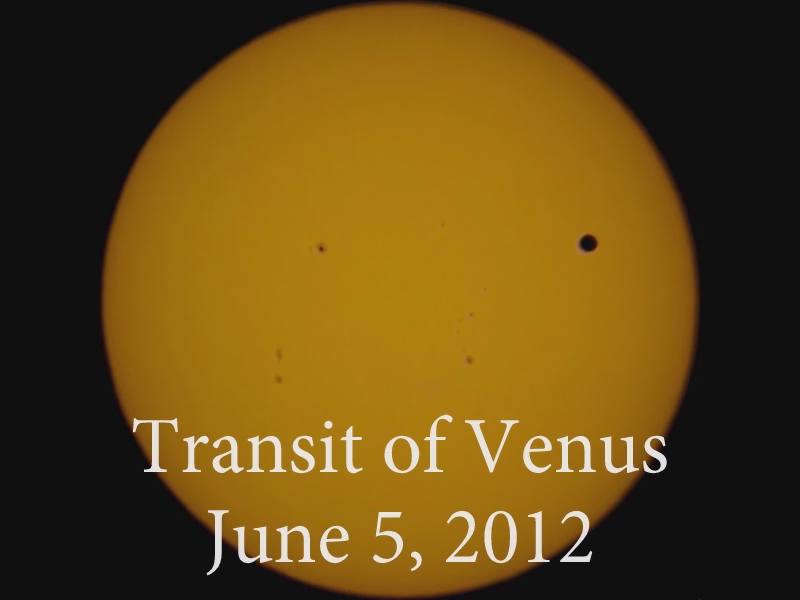 Not seeing the above video? Click here to watch.

Obviously this one had some trimming errors… and nasty dust on the sensor but this is the once in a lifetime Transit of Venus.

2 thoughts on “Trimming away the Excess (Photoshop)”