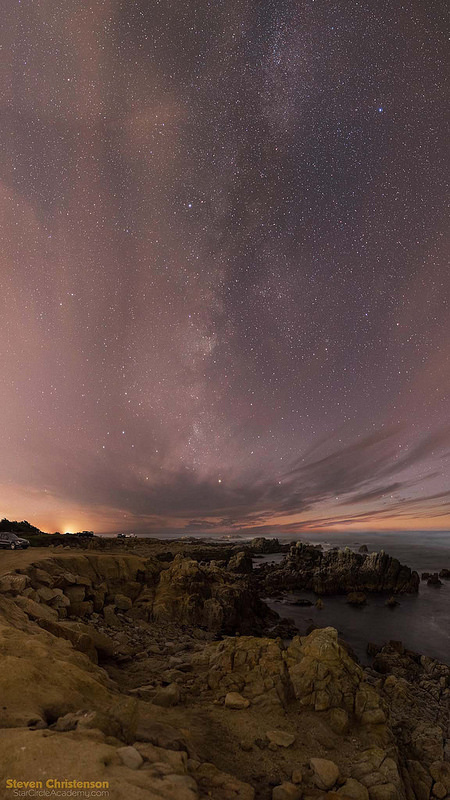 Noise Means: Variations in luminance (brightness) and chrominance (color) in an image that are not in the object being imaged and not caused by the optical system. These variations generally are perceived as colored speckles and resemble grain in film photography.

There are, however, many types of noise – each having different causes and thus different solutions.

Usually the problem is not noise but with noise that overwhelms the “signal”.

The Five Kinds of Noise

There is not just one kind of noise. There are five. Ok, there are actually MORE than five kinds of noise, but here are the most significant ordered from most to least likely to overwhelm a night image.

You may see different terminology in other articles. For example “Fixed Pattern Noise” is often used to describe stuck/hot pixels.  For me “stuck pixels” while often annoying are one of the easiest to control using “dark frames” – or with newer cameras, require NO work. More on that in a moment.  Let’s briefly address each kind of noise, what causes it, and how to best prevent it.

Despite what you may have been lead to believe, random noise IS random. Speckles can appear anywhere on your image in light or dark areas. These speckles are caused by *random* quantum effects.  Electromagnetic induction, electro magnetic fields, gamma rays, sunspots, static charges, impurities in the electronic substrate, and blind bad luck. ALL of these effects are magnified by heat which is the single nastiest mafioso of noise. Longer exposures produce more noise. And “Dark Frame Subtraction” (an element of Long Exposure Noise Reduction aka LENR) can do *nothing* to alleviate random noise. Soon however we will tell you how to reduce noise the way an astrophotographer does.

The more you push an image, the more likely you are to see vertical or horizontal banding – or both.  Pushing refers to high ISO sensitivity or large increases in exposure in post processing. Pushing also refers to using lower quality sensors at well above their quantum efficiency – which we will explain in a moment.  As with random noise higher ambient temperatures can intensify this type of noise.  Another example of fixed pattern noise refers to pink, purple or overly bright areas in an image. Early cameras were particularly prone to this form of noise because the electronics of the camera were unevenly heating the sensor – and as has been pointed out above, temperature is the enemy of a clean image.

To be precise, it’s usually not “pixels” that are stuck or hot – it’s sensels. Because each pixel is comprised of two green, one blue and one red sensel it’s often easy to tell which of the sensels is defective by observing the color of the pixel. If red – the red sensel is registering a value higher than it should. “Stuck” sensels usually result from one of the following causes:

Often the higher the ISO, the more offensive a stuck pixel appears – however stuck pixels which are present in every frame can be removed using dark frame subtraction, and indeed modern cameras can remove these automatically. Dark frame reduction is something the camera does when it does “Long Exposure Noise Reduction”.  Sometimes resetting the camera can dramatically reduce the hot pixels. The method for resetting a camera varies, but on many Canon cameras, the prescribed method is to use the manual “sensor clean mode” -> Now and leave it in that mode (with no lens attached) for at least a minute before turning off the power.  Also note that heat often exacerbates the stuck pixel problem, too.

Tip 1: “Reset your camera after it has temperature stabilized and before shooting. Usually this is a simple as “Clean Sensor -> Now” Many modern cameras make note of the stuck pixels and will automatically remove them for you!

The process of measuring each sensel involves an imprecise analog to digital conversion. The measurement phase can introduce its own error called bias. Rather than reading an unexposed (black) sensel as a zero, some sensels may read 2, some 4 and others 7.  This offset noise is also managed pretty well by LENR and except when it is really bad, is not significant.  Merely darkening the darkest pixels may be sufficient to hide offset noise.

This is a curious name but it refers to the fact that photons (light) do not arrive at a regular rate – especially for dark subjects like dim stars or the darkest of shadows. Since the camera collects and counts photons, variations in the rate of arrival of photons results in speckling. However normally shot noise is minimal and not noticeable. Shot noise is usually noticed only when severely underexposing or by aggressively brightening underexposed areas.

Looking Noise in the Face

Zooming in on a dark frame – one taken with the lens cap on shows the nature of noise. First is a dark frame without any adjustments.  Some red and green noise is barely discernible. 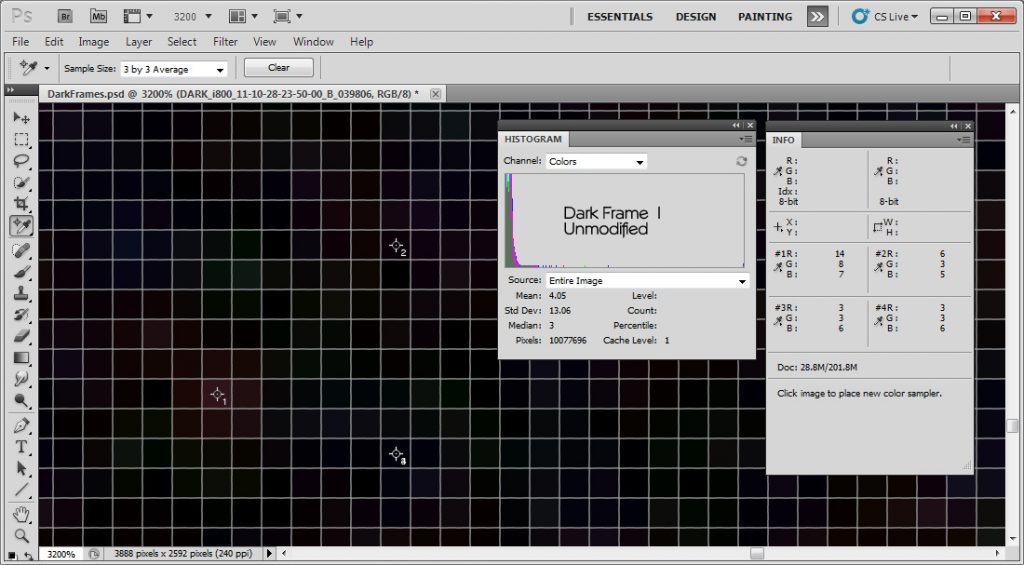 Looking at the same frame with an adjustment to boost the saturation and brightness, the nature of random noise is more obvious. 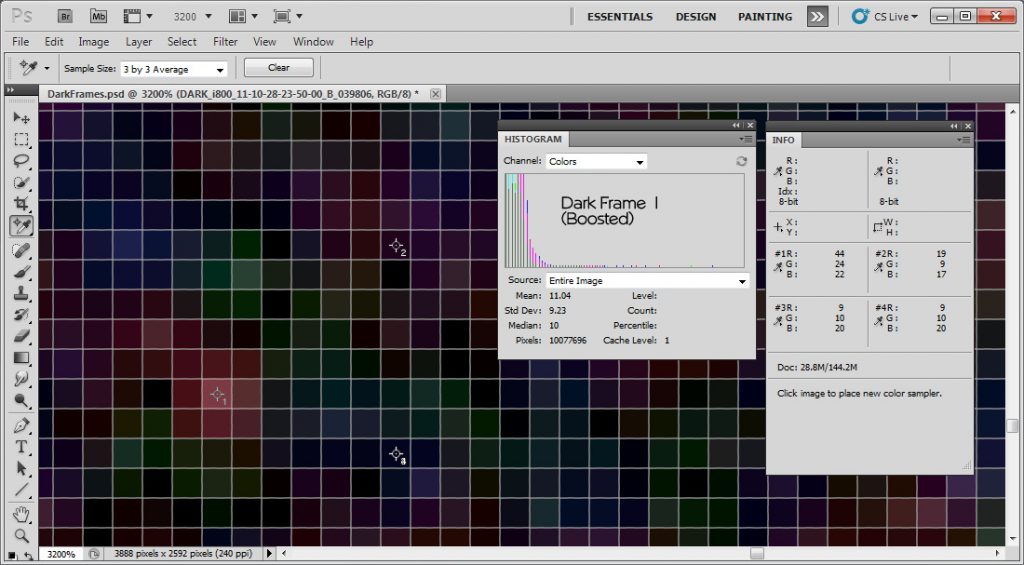 Notice how the noise is different in the same area of another frame. 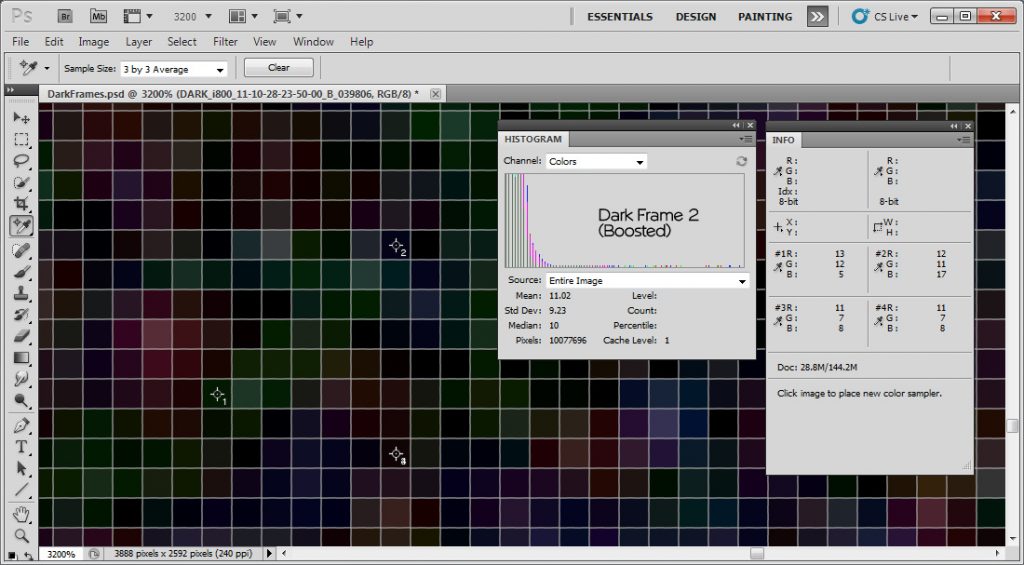 For more examples of noise in dark frames, see this article.

Sadly, one of the most significant sources of noise is heat – the heat in the air.  Shooting in the desert at 100 degrees Farenheit will always create far more noise than shooting at 30 degrees F below zero.  Can you help the problem by cooling the camera? Yes you can!  Gary Honis built a cooler for his camera (used for astrophotography) and got quite impressively better results. His chart of noise pixels is no longer on the site, but it dropped from thousands of bits of noise to to tens by cooling his camera 40 degrees Farenheit. However beware that if you also cool the lens you’re likely to get dew.  And if you have an open system like in Gary’s Telescope scenario, you may get dew on your sensor, too.  Not surprisingly ALL high-end cameras for astrophotography are cooled. The most extreme are cooled with liquid nitrogen!

The second take-away is this:

Tip 2: If possible, opt for shooting in cooler climes.  If you’re shooting the Milky Way, for example, you can check a Planisphere and you’ll find that you can get the same star configuration at different times of the night in different parts of the year.

You may have seen some velvety smooth night images produced by top of the line cameras and may be wondering if you can achieve such results with your middle of the line equipment. Unfortunately the answer is mostly no.  Generally speaking two things dramatically affect the amount of noise produced in a camera’s sensor with regard to night and low-light images and those are:

There is one other measure of a sensor that keeps getting better: it’s quantum efficiency.  In an ideal sensor each photon will increase the count of the sensel it strikes by exactly one.  The efficiency of a sensor can be determined by calculating its “ISO at Unity Gain”.  The higher the number, the better the sensor performance.  DxO Mark calculates approximately this value and represents it as the ISO value in its “Sport/Low Light” rating.  For daylight subjects with gadzillions of photons flying a great picture doesn’t require a high efficiency sensor. But in low light every photon should be counted!

Here are the top 3 Full Frame or crop cameras (plus #4, the one I chose) ranked by ISO of the “Sports Score” (a good approximation of the quantum efficiency) and initial price as of November 16, 2017. Click the image to see the latest chart and to find your own camera. 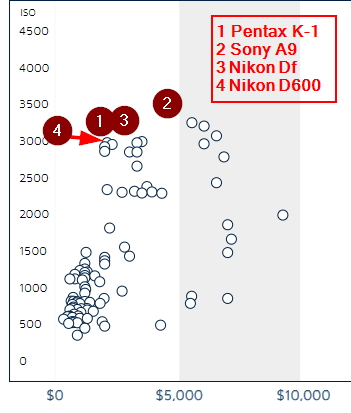 There are many ways to use software to reduce noise in an image. Tools like Canon’s Digital Photo Professional (DPP), Adobe’s Camera Raw (ACR), Lightroom – which uses the ACR component, and many plugins and filters within Photoshop.  Keep in mind that no noise reduction technique will result in keeping a perfectly sharp image – all methods blur the result.  TopazLabs DeNoise (and inFocus) product claim to have deconvolution techniques to keep edges sharp. The good news is that a slightly blurred sky – like clouds, looks quite natural. What is my preferred method? 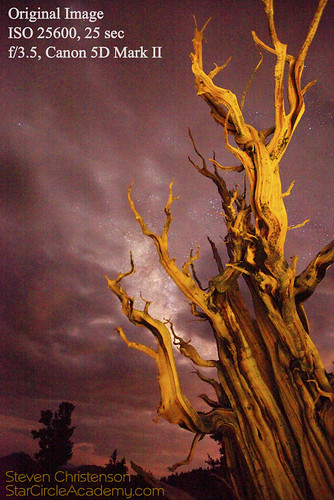 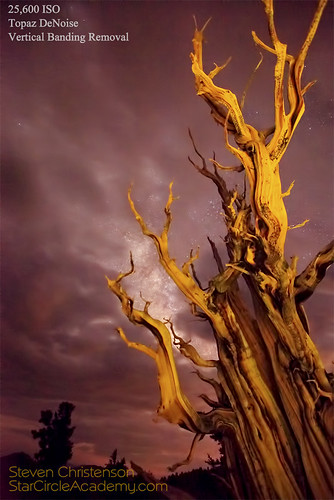 Here is a closer crop of the areas most changed by the noise reduction: 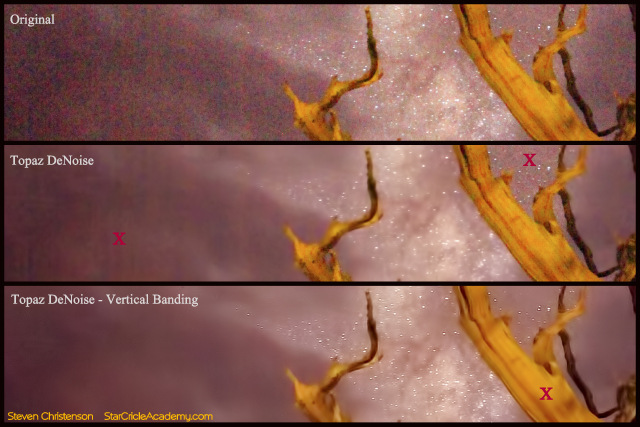 The original image and two attempts at noise reduction. Notice that some areas (X) remain problematic

A good noise reduction strategy is to NOT denoise everything.  Duplicate the image to another layer in Photoshop. Apply noise reduction to that layer and then use a layer mask to reveal the noise reduction selectively. In the example above, masking off the Topaz Denoise on the tree would have left a sharper tree.

Yet another noise reduction method – useful for random noise is to do median (using Statistics in CS Advanced or Photoshop CC) or averaging of shots. 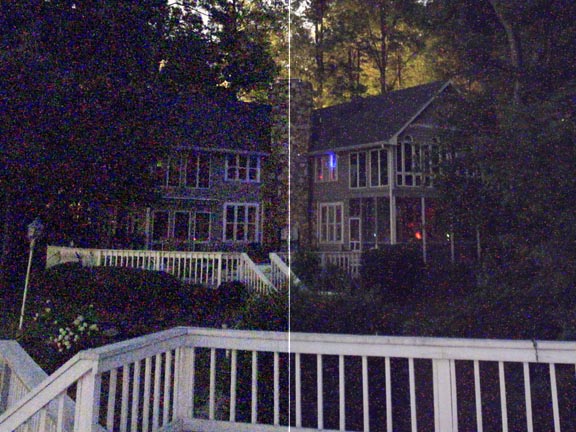 On the left is a single 25,600 ISO exposure. On the right, 15 shots averaged but with no other noise reduction attempted.

Hopefully you remember that there are many different kinds of noise. The techniques described above are used for controlling both random noise and stuck pixel noise. But stuck pixels can be managed by doing your own “dark frame subtraction“.