The total Lunar Eclipse of February, 2018 reminded me of my travails from my first effort to shoot an eclipse in 2010.

In December 2010, I was crestfallen to see the weather reports. The last total eclipse of the moon visible from North America until 2014… and the weather everywhere within a reasonable 3-4 hour drive was predicted to be 90% clouds and worse. It seemed my eclipse was going to be eclipsed by cloud cover.

At about 9:15 PM, PST on December 20th, however, I looked up and saw… THE MOON!  Sure, it was scintillating in a little sucker hole playing with me. But I decided to play along. I hastily hauled out the Canon 5D Mark II, the 70-200mm f/4 IS L lens, the 1.4x Telextender, and the Gitzo carbon fiber tripod. Why those? Because that’s what I found first.

My equipment was scattered about in my office still recovering from the wet weather from earlier in San Jose. Indeed, I did not find the batteries for my Canon 50D camera.

By the time I got set up, I realized that the moon would very soon be contacting the earth’s umbra (darkest part of the shadow). So I quickly got to shooting what I could. Never mind that it was cold and I was not dressed properly.  Soon enough the clouds would come and I could dart into the house to hurriedly collect what I was missing.  The first shot I got was with the moon in the earth’s penumbra. Not particularly remarkable, unfortunately.

Through various breaks in the clouds I was able to get photos from first umbra contact all the way up to totality. Including a serendipitous shot of an airplane headed, probably, to the San Francisco airport or some other place to the north west. 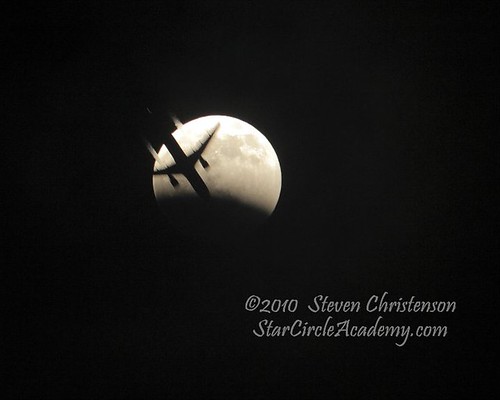 What settings did I use for these shots? f/7.1, ISO 200, and 1/400 of a second exposures. Why so fast? Because, my friends, the moon is BRIGHT. Even partially eclipsed, even already in earths penumbra it is a big bright object. Shooting the moon is a definitive case where your camera absolutely cannot get the right exposure if left to itself. A good exposure must be manually set. I arrived at my settings by a few quick trials. I started at about 1/200th at f/5.6 and noticed that I was getting some over exposed areas (on my LCD screen the overexposed pixels blink white). I then decreased the aperture and continued to tweak the focus.

I definitely made a slew of mistakes. The most significant one is that I should have put the telephoto lens on my 50D body which is a 1.6 crop camera. Had I done that all my moon images would have been about twice the size of what I actually got. Not having my camera all packed away in my bag meant some lost opportunities here.

I also thought  that perhaps the 5D would have been a good choice to get a sequence of shots showing the progression of the eclipse. The idea was to get the moon in the bottom corner of the frame and take a series of shots as it moved to the upper left of the frame. This also did not work for several reasons. The first problem was that the cloud “holes” came at irregular intervals – so spreading them across the frame evenly was not going to happen. The second problem was purely my failure to correctly guess the path the moon would follow in the sky.  Had I been a little smarter I’d have switched lenses when I realized the timelapse path was not going to work. But instead I tried again a few times.

I also realized that when the eclipse was total, the moon was going to be quite dim and the superior high ISO performance of the 5D II was needed. For the totally eclipsed shot, the ISO was ramped all the way up to 1600 and the exposure dropped from 1/400 to 1/6 of a second. That is a HUGE difference. The slower exposure meant that details in the moon would be blurred and the stars at this telephoto range would become dashes rather than dots. 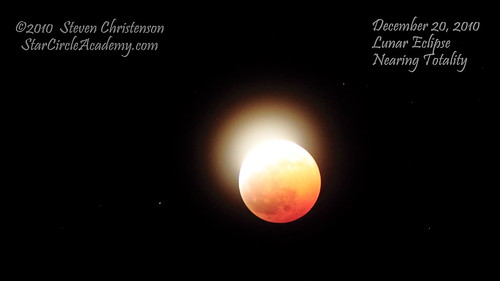 Sadly I was NOT much better prepared. After studying the weather forecasts, I headed to the coast where it is often really yucky with fog, low clouds, and on-shore winds that bring dampness and salt spray. It was surprisingly clear. My goal was to take a series of shots showing the progression of the eclipse ending at sunrise with the moon hovering over the Pigeon Point Lighthouse. I had done all the calculations as we cover in our Catching the Moon Webinar. (And also somewhat described here)

I imagined something like this effort, but better done. 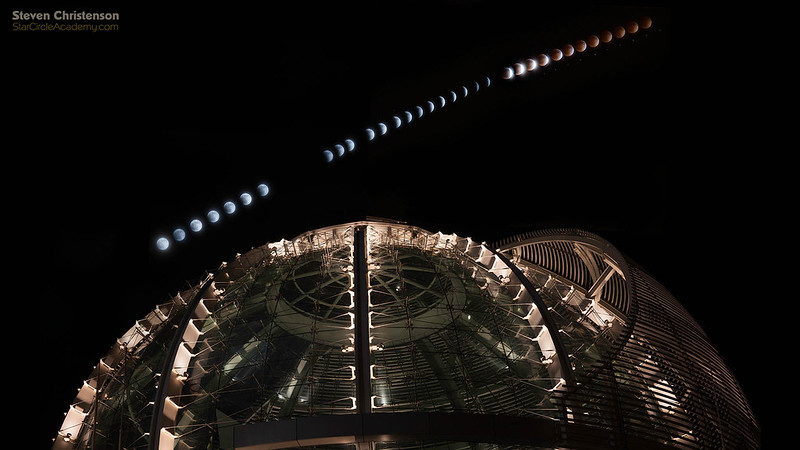 As it came about in 2014, we had to go with plan C due to weather. So I was excited that the weather forecast for the coast was much better in February, 2018. Some oversights on preparation conspired against me. I had not jotted down the proper GPS location and on site I had no cell signal, so couldn’t (re)calculate the spot. That left me wandering about trying to find the little tree and path that was featured on the satellite view… and NOT finding it.

Instead I ended up wandering into a thicket of brush that had an abrupt downward slope. That was fall number 1. Several efforts (and falls) later I tried setting my tripod down THROUGH the gorse all around… only to snap the leg off of my tripod. Now I needed to take  trek back to the car for my backup tripod. (Fortunately I had one!).

Since I got a late start, I scrambled to try to get a couple of series of panoramas on which to overlay the moon trajectory. However the moon was already in complete eclipse by the time I had everything set up. It was only then that I realized I was not getting the details I wanted out of the moon. I was using a 70mm f/4 lens, and the long exposures were streaking the stars and blurring the moon. So while I did get a FEW shots, they weren’t the ones I had imagined. My problem, in a nutshell, was that I was trying to get the moon AND the stars … which I did, but at the cost of streaking and blurring. 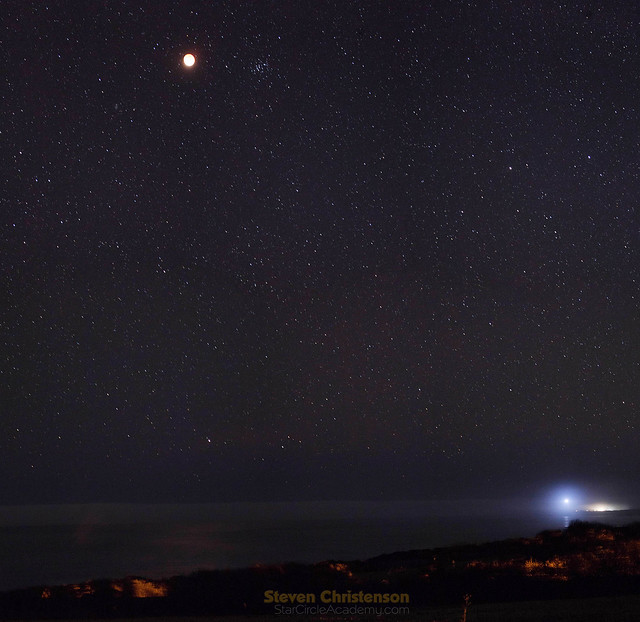 By the time twilight started to appear, it was obvious that my location was about 1/4 mile distant from where I wanted to be… the little tree that I thought might form the right edge of my panorama was far off. The moon was NOT going to land anywhere near the Pigeon Point Lighthouse, so I packed up and ran up Highway 1 closer to the calculated location. I had to abandon the sequence plans, throw on the big tele-extender and HOPE the moon would survive visibility through the now obvious off-shore fog bank. Of course it didn’t. It fizzled as it got near the target.  I did get a consolation prize of sorts, though. This image hit 80 THOUSAND views in a few days – becoming my most popular photo on Flickr EVER. Sadly it’s not the image I imagined. 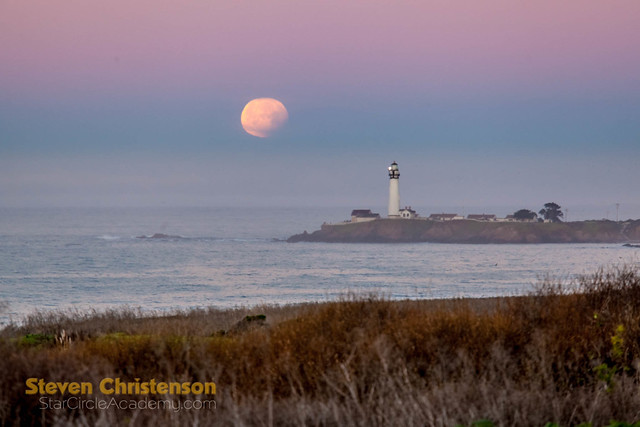 Photo from the end of the total eclipse of February, 2018

What Did I Learn?

To get a decent eclipsed moon shot with details, either you need a very fast telephoto lens, or to use a mount to track the moon. I also need to be willing to lose more sleep. I woke up at 3:00 AM, but the 90 minute drive meant that the umbral (dark part) of the eclipse would be starting as I arrived.

I also realized that if I’m going to spend the better part of a day mapping out the moon trajectory toward a landmark like the Pigeon Point Lighthouse, I’d do well to record some GPS locations (where to park, where to stand), and even get a Google map pre-downloaded.

Hopefully you, dear reader, will learn from my mistakes because you won’t have enough time to make them all yourself!